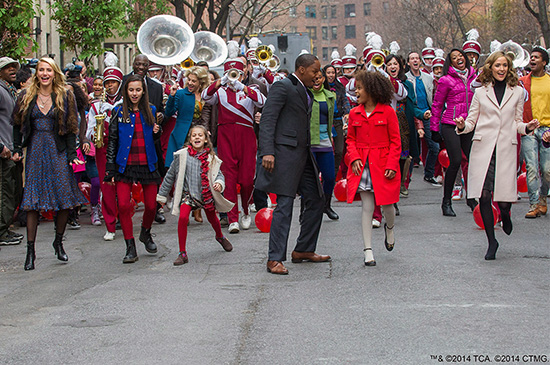 Although Annie was originally released in 1982, the 2014 remake of this classic film is something all families will enjoy. Of course remakes never replace the original, but this version gives Annie a fun, modern update. From the diverse cast, to new songs, to a few changes about Annie’s life, Annie will leave you “fully dressed with a smile.”

One of the most noticeable differences in the 2014 version is the cast. Annie, played by newcomer Quvenzhané Wallis, and Mr. Will Stacks, played by Jamie Foxx, originally Mr. Oliver Warbucks, are both African American. Not only can Caucasian girls relate to Annie, but now, African American girls can as well. Even though Annie is African American, Wallis still depicted her with the same spunk and humor as Aileen Quinn did in 1982. Foxx also did a great job presenting workaholic, yet caring and funny, Mr. Warbucks, who was originally played by Albert Finney.

“It’s a Hard-Knock Life,” “Maybe,” “Tomorrow,” “Little Girls,” “Easy Street” “I Think I’m Gonna Like It Here,” “I Don’t Need Anything But You” and “You’re Never Fully Dressed Without a Smile” are the classic songs found in the original Annie and were included this one as well. However, some of the lyrics and the music itself were tweaked to fit 2014. They were energetic and gave these songs a pop. You will probably have the soundtrack on repeat later.

Not only were these songs included, but there were also a few new songs put into this movie. Chandelier singer Sia even sung two songs that were a part of this movie, which were “You’re Never Fully Dressed Without a Smile” and “Moonquake Lake.” Three other songs, “Opportunity,” “Who Am I?” and “The City’s Yours” will probably raise your eyebrows at first, too, but do not panic. They are great additions to the film and really make it unique.

The cast and the music were not the only differences between 1982’s Annie and 2014’s Annie. Although it was not in the 1982 version, it turned out that Annie could not read. In the beginning, when Annie had to read her report about the New Deal for class, she improvised and used class participation to talk about her topic instead. Students chanted, stomped and clapped. Although shocking at first, this is quite realistic. There are kids, both in and out of foster care, who cannot read.

One last difference was how Annie went about finding her parents. She waited outside a restaurant for news about them. The owner always told her the same thing—her parents never showed up. That was the last place she was with them before she went to live with Ms. Hannigan, played by Cameron Diaz. Not only did she have the locket her parents left her, but she had a receipt, too. On the back of it was a note that said to take care of Annie until they came back for her. This was another nice little tweak added in this film.