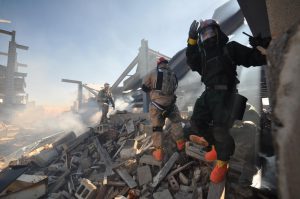 Almost 11 years ago, Hurricane Katrina unleashed its wrath over the Gulf Coast of the U.S. Rescue teams scrambled in cities, such as New Orleans, to help flood victims and other survivors. The unpreparedness and unorganized rescue efforts persuaded Geoff Burkart and his son Vann, an alum of UWG, to establish The Guardian Centers (GC).

Opened in 2013, GC is a Disaster Preparedness and Tactical training center located in Perry, Ga. It is designed to help federal and state organizations and first responders work together to act swiftly and decisively in times of crisis, using real-world scenarios and operations.

“There’s plenty of military and state sites, but there aren’t many that can accommodate multiple agencies, organizations and/or departments that can come together and train together like they would in a real-world, large-scale incident,” said Vann Burkart, co-founder and program director for GC.

GC is unlike any other training facility in the world. The campus consists of nine hands-on training areas including a residential flood area, small arms range, staging area, an explosive range and a modern cityscape that enables realistic, large-scale exercises.  Each area is tailored to the specific needs of those who train there, whether it is military or state organizations.

GC not only has the capability to deliver customized training and exercises but tailored training courses as well. Inspired by the ninth ward in New Orleans during Hurricane Katrina, the residential flood area can replicate a residential flood scenario where an entire neighborhood with fully constructed concrete homes can be flooded up to eight feet deep. Obstacles such as furniture, outside fencing, swing sets and vehicles in the streets and yards are put in place to enhance the training experience and bring awareness towards preventing any damage to responder equipment and victims.

Between August 8 and August 14 Louisiana received about 6.9 trillion gallons of rain which resulted in extreme flooding in many areas, especially Baton Rouge. Because of places like GC, first responders knew how to handle the situation effectively.

“Everyone comes here looking for the appropriate training from us,” said Vann. “It’s all across the board. Everything from military to federal organizations, to state departments, all the way down to local jurisdiction departments, from disaster response, both manmade and natural disasters, special ops forces to tactical training. We try to be everything to everybody.”

To make the training as real as possible, GC also uses civilians to play the part. Actors will come in and role play as victims or aggressors alongside life-like mannequins that breathe, cough and react to their surroundings. In the residential flood area, each house is equipped with full attics and roofs. Role players can be inserted into these attics and then rescued just like in an actual flood situation. The roofs can also be cut into to extract role playing victims.

When there is not a first response group occupying the facility, GC is open to other organizations. Airsoft programs use the facility as military grounds, and every Saturday before Halloween GC hosts the Zombie Run. It is the biggest 5K run that they do with six to seven thousand participants. As of now, the run is not used as a fundraiser but has been in the past for Smile Train, a cleft lip and palate childrens charity.

GC does not end in Perry, Ga. Their goal is to build smaller training facilities in other regions of the country like the Northeast and Southwest. Those training centers will not be as big as the primary facility in Perry, Ga., but they will provide excellent training courses and curriculum development.

“We pride ourselves in being the best that we can be, and that means providing everything that an organization would need to succeed in a real-life scenario,” said Vann.