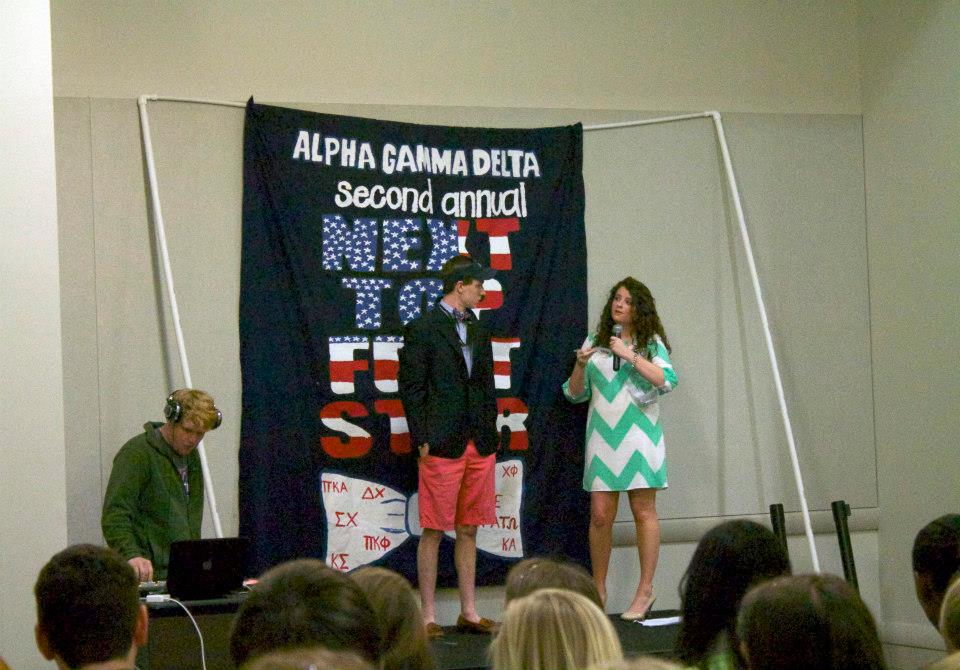 This year the sisters of the Alpha Gamma Delta Sorority hosted their 2nd annual next top frat star pageant. The contestants were volunteers and were sponsored by other Greek organizations and all money that was raised from the event went to The Alpha Gamma Delta Foundation of Juvenile Diabetes.

The pageant consisted of an introduction with a question asked to each contestant, created by the ladies of the sorority. After that there was a talent portion where each contestant had free reign to express any type of talent or lack thereof that they wished. The pageant was more about bringing people together for a cause and having a fun time doing it, “the whole reason we do it is to get girls from sororities to sponsor the guys and get everybody together for one night to have fun and laugh together,” said Jenna Core sister of the Alpha Gamma Delta Sorority.

Each contestant was scored by a panel of judges that was made up of members from the various different Greek organizations on campus. All of the contestants performed funny talents. Some danced, others sang and one contestant simply ate an ice-cream cone. “That’s what I love about it,” said Core, “it doesn’t always have to be so serious it can be fun and make no sense at all. Raising money for our philanthropy is what really matters.”

Admission to the pageant was five dollars. T-shirts were also sold at the pageant and all of that money went to Alpha Gamma Delta’s philanthropy. “The philanthropy supports diabetic research and it’s an opportunity for students in Greek Life to participate with one another as a unit and to know that they’ve helped a cause together,” said Emily Sprague, Advisor of the Alpha Gamma Delta Sorority.

Members from each Greek organization on campus were there to watch, be entertained, laugh and support. Some students came to support their fellow participating fraternity brothers and others came with the hopes that the guy they sponsored would win the title. Everyone else came for the entertainment. “I like to come back and see all of Greek Life coming together because it’s not just about one individual chapter; it’s Greeks as a whole,” said Sprague.

The guys who volunteered and the girls who sponsored them are what made this pageant such a success as they helped to start the process of raising money. The ladies of the Alpha Gamma Delta Sorority also marketed the pageant to help raise the money as well. This year’s winner and next top frat star was, Micah Smith of the Sigma Nu Fraternity. It was a friendly pageant and all of those who participated were glad that they could help support The Alpha Gamma Delta Foundation of Juvenile Diabetes together.