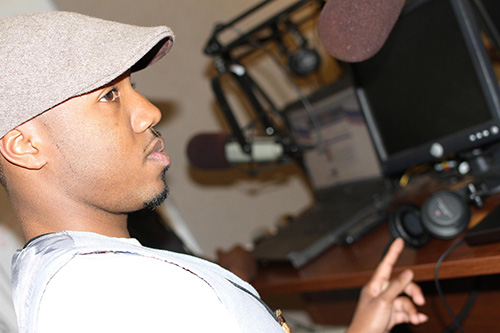 Being an entrepreneur has been Jeral Clyde Jr.’s, “JC”, calling from a young age. In his early teens he began selling candy, which turned into him selling apparel in high school. He now is the founder of 3umph Studios, which focuses on developing and branding other companies. Clyde graduated from UWG in fall of 2014 with a Bachelor’s in Mass Communications with a concentration in film and video production.

During his time at UWG, Clyde produced shows that targeted college students such as The Hook Up and West Georgia Cribs. He also worked on a number of other film projects including music videos, web series, weddings and special events.

With the assistance of a fellow colleague, Clyde filmed his first feature film, entitled A Product of Me, in the summer of 2013; the film was released the following spring.

“It is a coming of age story that tells of the interracial friendship as they prepare for life after high school,” said Clyde. “Both characters encounter adversaries that test their friendship, their strength and the power to go on. We see how they are individually affected as a result of their poverty, drugs and a crime stricken environment. It basically shows how anyone can become products of their environments no matter what color you are or where you are from.”

Due to the success of the film, Clyde has also introduced A Product of Me clothing line, documentary and a book. Several students can be seen on campus wearing A Product of Me t-shirts and sweatshirts. Professors even support and promote the film via social media and there is a possibility of the film premiering on Netflix in April 2015.

The A Product of Me documentary made its debut last summer. Clyde interviewed five people, including a city councilman, a drug dealer, an actor, a barber and an engineer and asked them to explain their meaning of being a product of their environment.

Currently, 3umph Studios is working on a short film as well as several other assignments. He plans to release some of his projects in the near future.

Clyde credits most of his inspiration to his late mother.

“I received inspiration from the killing of my mother,” Clyde said. “I learned that life is too short to sit around letting the world pass you by. If I was going to turn a dream into a reality then it would be up to me.”

Clyde urges students to learn how to balance school and work with having a social life.

“When I was in college, I found that balancing school, business and personal life was difficult. Looking back at it, it was only difficult because I made it difficult. Having a schedule, organizing your time and money can save you a lot of headaches in the future. Knowing where you are in life and knowing where you’re going determines your direction.”