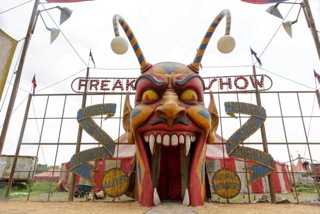 American Horror Story is a television series that sets out to frighten those who dare to watch and has been doing that since 2011. Producers and creators Ryan Murphy and Brad Falchuk center each mini-series on the most horrific storylines any person could imagine. With titles like Murder House, Asylum, and Coven, it is no shock that season four’s title did not disappoint.

Producers used this year’s theme, Freak Show, to take the show to new heights. This season is all about the circus—from clowns, to the bearded lady, to the two-headed sisters. It proves why the circus is not the place to be, especially after dark. The season’s setting is in 1952 Jupiter, Fla., where circus master Elsa Mars (Jessica Lange) has a hard time finding a place for her and her show to thrive. At this point in time, freak shows were no longer a thing of entertainment for the community. The season premiere Elsa looks to conjoined twins Bette and Dot Tattler as the next big thing to help her show take off.

The series definitely kept the classic freak show components with the three-breasted woman, bearded lady, strongman and a boy with webbed hands and feet. Although the theme of a freak show in itself is scary, this season’s theme focuses on being different and trying to fit into a society that no one belongs to. As the show continues, there is something within Jupiter that is making it very clear that the monsters and the freak show are not welcome.

With a season title like Freak Show, there is an underlying sense of scariness that audiences expected.

“I did not think it was as scary as it could have been,” said Rachel Williams, an avid American Horror Story fan. “ For it to be a circus theme, I think they could have made it a lot more scary, and it is a lot more sexualized this season.”

For some viewers the season premiere left room for improvement in the fright department. While the premiere fell short for Williams, season four has already beaten the past three seasons as far as ratings are concerned.

“The technical aspect of coming up with each mini-series and making them increasingly scary season by season is a work of art,” said UWG theater major Asia Griggs.

Season after season, Murphy and Falchuk seek to outdo themselves by constantly stepping outside of the box and pushing the stereotypes on what being frightened and scared really is. Season four has just kicked off, but the season promises to make this the best and most horrifying freak show their American Horror Story audience has ever been apart of. There are already plans in motion for a season five.