Rape and assault victims came forward on social media hoping to open the eyes of Americans who were either ignorant of the situation or ignoring the situation. The hashtag MeToo campaign sprung to life after several public figures who had been sexually harassed revealed themselves and their stories.

Social media is becoming more popular in terms of revealing your innermost thoughts. Some even use it as a way to release a horrific experience they have undergown. A rape or sexual assault from someone who is trusted continues to be the case. Alyssa Milano, an actress, took to her Twitter account to encourage women to use the #MeToo, to expose the magnitude of a rape problem in the country. The #MeToo campaign hadn’t begun with Milano though; it goes back further.

#MeToo began with Tarana Burke, the founder of Just Be Inc. who shared a story of her younger days. She talked about how she was unable to muster up the courage to be the shoulder to lean on for a rape victim. A little girl was abused by a man her mother was dating and as she began to tell the story to Burke, Burke stopped her and suggested another counselor who might be able to help. Burke regretted her response in that situation because she could relate to what had happened to the girl. She wanted to say “me too.” 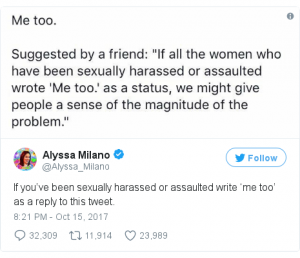 In the weeks of October, the campaign flared on Twitter of women and men coming out with their hashtags. Bill O’Reilly, an American journalist, is a prime example of someone who used their power to take advantage on women in the same industry. O’Reilly was not the only person in the position to contribute to the trend of powerful people sexually harassing those under them. McKayla Maroney, a former Olympic gymnast, accused her former USA Gymnastics doctor of raping her since she was a teenager and continued for years. The list of the accused continues to grow as the campaign moves through the entertainment industry.

So often, cases of rape and sexual assault goes unannounced and unchallenged. However, this is not because the situation is never brought to someone’s attention. Many times, the victims are ignored or told there isn’t any proof. Actress Rose McGowan experienced the “no proof” statement when she attempted to tell someone that Harvey Weinstein, a film producer, raped her. Even victim blaming causes people to hold onto their darkest secret in fear that they will be shamed, outcasted or embarrassed for something that they did not do but something that was done to them.

The Netflix series,“13 Reasons Why”, focused on the main character, Hannah played by Katherine Langford, who committed suicide and recorded it on tape. Throughout the first season, viewers saw how rape in a seemingly average school had been ignored or celebrated. Due to the rapist’s position at his school, no one wanted to hold him accountable.

Even when he was confronted during several episodes, he said that he didn’t consider what he was doing to be rape. The show never revealed whether his parents, the teachers or the coaches knew of his actions but his friends definitely knew. The 13 people who listened to the tape heard two accounts of rape by the same person. Many of the characters believed that Hannah lied and that she made the stories up to romanticize her suicide.

Whether it is public figures or an average person, several individuals face the same struggles when it comes to rape and sexual assault. Unfortunately, it can happen in the workplace, the schools, and even in homes.