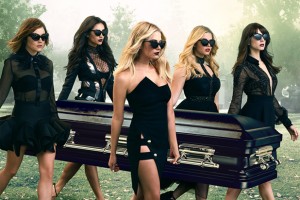 The continuation of the sixth season of the Freeform, previously ABC Family, series Pretty Little Liars premiered on Tuesday, Jan. 12. The main characters of the show, Emily, Spencer, Aria, and Hanna, returned to their hometown of Rosewood five years after their high school graduation. While there are many changes to the girls’ lives, such as new love interests and careers, much has stayed the same, like their uncanny ability to attract trouble.

The season 6A finale wrapped up by answering the question that kept the show running for five years: who is A? Now that viewers know who A is, the series will have to find a new focus to keep the viewers’ interest.

Our favorite liars have elevated from high school heroines to women of the work force, which sparks enough curiosity to continue binge watching for another season. Each girl managed to escape the town of Rosewood in pursuit of their career goals and all of them have succeeded except Emily.

While Hanna fetches coffee for a top fashion designer in New York and Aria works with authors at a publishing agency in Boston, Emily’s collegiate career doesn’t go as planned and she ends up being a bartender. The girls’ professions tie into the plot because they are forced to stay in Rosewood and give up their careers, at least for a while, to combat a new threat that is very familiar to them: the possibility of a new A.

With the most recent A locked behind bars of a nut house, the girls feel free to live their lives without the fear of being stalked and harmed, until the infamous Sara Harvey shows up with a presence that just can’t be ignored. She makes her debut at a funeral and is blind with very little mobility of her hands. This brings the series back to where it started in Season 1 with the “Jenna Thing”, since Jenna was also blind and the girls were also responsible for that incident. The first two episodes of the season make it clear the girls are accountable for Harvey’s condition, but we don’t know how. The previous season’s finale shows Sara Harvey unconscious from Emily’s mean right hook. Harvey emerges this season with more than just her jaw disabled. This implies more took place that night in Radley Sanitarium, which is now a hotel owned by Hanna’s mom, and gives Harvey a potential motive to promote herself from part-time to full-time A.

While most people tune in every week to see the fab four dig themselves deeper into A’s web, a large part of the viewers watch for the on-screen heartthrobs and former boyfriends of the girls. This season, each ex-boyfriend returns a little more mature due to the time gap, making viewers wonder if they will try to rekindle old romances with their former girlfriends or leave it in the past.

Freeform has only aired two episodes and like every season before, both episodes end with cliffhangers, enticing the viewers to watch next week’s show. The new season resurfaces the same plot of hidden secrets, murders, and inevitable lies but with a sophisticated spin and a brand new mystery that will leave “PLL” fans wanting more.