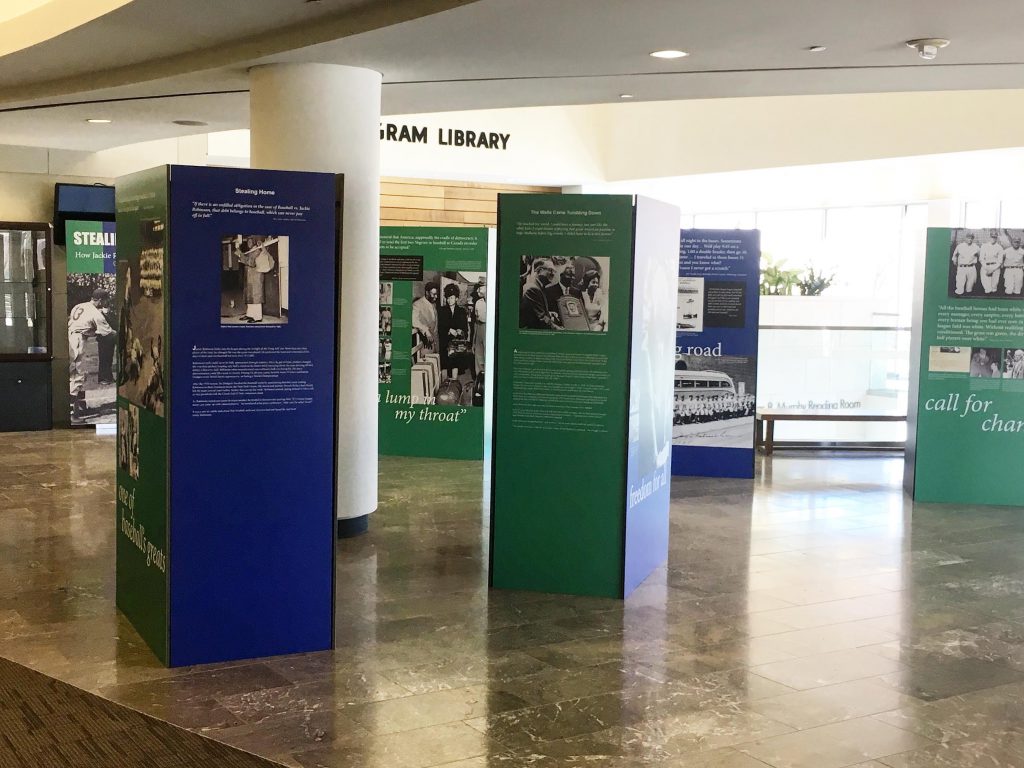 The Jackie Robinson exhibit is on display in the lobby of Ingram Library. Opening on Feb. 20 and concluding on Friday, March 17. The exhibit showcases Robinson’s life, courage and triumphs in his athletic career, while also focusing on the racism in America during his era and his hard work during the Civil Rights struggle in the 1940s and later. The exhibit is sponsored by Ingram Library’s Penelope Melson Society in collaboration with the Center for Diversity and Inclusion.

Following the Kennedy Assassination exhibit in the fall, the Robinson exhibit is meant to gain the attention from students as well as the people in the Carroll County area.

“This is the 10th exhibit and the very first was held in September of 2008. We never know if what we choose is going to interest people or not,” said Dr. John Ferling, UWG Professor Emeritus of History and president of the Penelope Melson Society. “We had one of the Kennedy Assassination in the fall and kind of came away with the feeling that the students were not particularly interested, but we had a large turnout from the town.”

The display cabinets set up for the exhibit present a wide range of items that consist of significant moments in Robinson’s career. The material in the displays all belong to Ferling’s collection over the years along with a few items that he bought specifically for the exhibit.

“When my dad retired 40 years ago, my mom called me and said that they were moving and I needed to come get some stuff in the attic that belonged to me,” said Ferling. “I played baseball and followed it along with other sports. I had purchased a lot of sports magazines and I guess I never threw anything away. I began investigating how I could get the rest of the magazines that I missed over the years and one thing led to another. Although, there is a Dodgers cap and pennant in the display that I bought especially for the exhibit, the rest of the items are from my collection.”

Robinson was not only an incredible athlete, but a civil rights activist who used his career to bring more integration into sports and particularly, baseball.

“The first thing that comes to mind about Robinson to most people is that he was an extraordinary athlete,” said Ferling. “There was another side to Robinson, which was his groundbreaking experience. People saw him as the opening door for others.”

Robinson endured several hardships throughout his career. In the first couple of years playing for the Dodgers, he was faced with a significant amount of racism, but his courageous attitude never faded.

“I think the students can learn a great deal about Robinson’s character. He was extremely brave and courageous,” said Ferling. “Robinson received death threats. He didn’t know if every time he walked on the field that some mad man in the stands could have a gun and possibly shoot him.”

The exhibit presents Robinson’s braveness throughout the course of his life and the courage it took to face the racist taunts and persecution he endured.

“One of the strong points to the exhibit is that it does teach about his courage,” said Ferling. “It was not by accident that Robinson was chosen by the Dodgers. They felt that they had to have just the right person.”

People perceived Robinson as a powerful leader who used his athletic ability as a unique approach to protesting in the Civil Rights Movement.

“Hopefully students will understand not just his character and athleticism, but that he was active in the Civil Rights Movement. It wasn’t just Martin Luther King and it wasn’t someone making a speech on the steps of the Lincoln memorial,” said Ferling. “There was much more to it with many ways to protest against racism, but Robinson did his part and that required courage.”