A young Spike Lee grabbed a Super 8mm camera and began filming. A native of Atlanta and, at the time, an undergraduate at Morehouse College, Lee was encouraged to submit his work in a festival for filmmakers located in the heart of Atlanta. The Atlanta Film Festival (ATLFF) is where many directors, such as Lee and Steven Spielberg, first introduced their work to a large-scale audience in the pursuit of becoming a notable filmmaker.

The board of directors is reaching out to anyone who has participated with the festival in the past. From former film critics to actual filmmakers themselves, the 40th anniversary is focused on continuing the momentum that allowed the festival to become what it is today.

“One of the greatest challenges with the festival is getting the word out to Atlanta,” said McAllister. “There are so many moving parts to the city that it’s hard to get everyone’s attention.”

The marketing team spends the majority of the year promoting the 10-day festival. ATLFF received close to 5,000 submissions this year – a generous increase from last year’s submissions, which totaled around 3,500. ATLFF’s street team, made up of mostly volunteers, helps with this significant increase. They are able to distribute ATLFF paraphernalia, such as fliers and shirts, to a larger area to help cover more ground.

“For every four hour shift a volunteer works, they earn a voucher for a movie screening during the festival,” he said. “We have had volunteers work an entire weekend and come back the following weekend as guests.”

Students in communications or film are especially encouraged to get involved. The festival holds numerous opportunities to network with film and screenwriting professionals.

“Volunteers can work the before and after parties or be a part of transportation where they drive filmmakers back and forth from their hotels,” said McAllister. “You could be in the same car as James Franco or a local Atlanta filmmaker who may be the next Steven Spielberg.”

Students can also intern with ATLFF to help put together next year’s festival. Promising film and media interns may even be able to assist with the submission and screening process.

There are seven categories of film, including narrative feature, narrative short, documentary feature, documentary short, animated short, best music video and the audience award. There is a team of programmers as well as screeners who watch every film submission multiple times to decide if it reflects the theme of the festival. While the jurors make the final decision in regards to awards, the screeners often seek out the intern’s opinion for a fresh perspective.

“We want to speak to our audience, whether it’s through political issues or local interests,” said McAllister. “We’re focusing on new voices with a wide range of subject matter that’s diverse both ethnically and on a gender basis.” 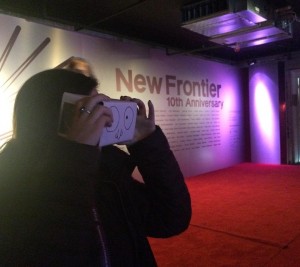 As the festival’s voice, McAllister wants to assure the content of the festival spans out among age groups as well.

“Interns and volunteers help us in that aspect,” said McAllister. “We’re becoming a world class festival by solidifying our status as a top notch destination festival.”

With ATLFF in between the Sundance Film Festival and the Toronto Film Festival, it inevitably gets classified as a secondary screening destination. By the 50th anniversary, the ATLFF board of directors hopes to be one the most extremely desirable festivals not just to attend, but to have people get involved with as well.