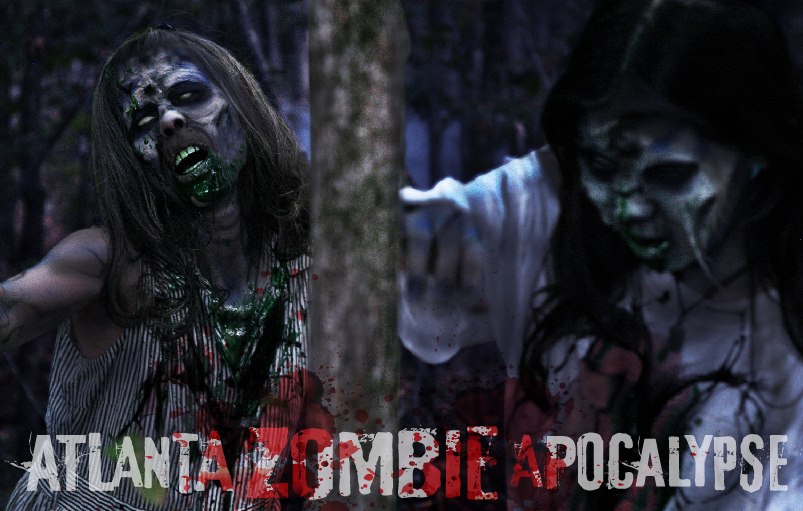 October is my favorite month. I love to be scared and I love Halloween. As soon as October hits each year, I look for the best haunted houses out there and pray that I will have the guts to finally go to one instead of looking them up on YouTube and watching haunted house specials on the travel channel. Years and years had built up until I finally got the courage, and the friend, to go to a haunted house and I settled on what I thought was the best: The Atlanta Zombie Apocalypse. With two haunted house attractions and a zombie shoot out coming in at $30 apiece, $60 if you go to all, I was sure that this would be the most terrifying and exciting Halloween experience to date. Wrong. Not only was it not worth the money, but it wasn’t worth the 45 minute drive from Snellville to Moreland Avenue.

While reading the reviews online and Googling everything that I could find about the attraction, I decided on going to the zombie shoot out alone instead of all three attractions. The zombie shoot out was supposed to be all of the terror of a haunted house mixed with the opportunity to shoot the zombies with paint ball guns. Absolute fail. We arrived at the attraction on a Sunday night at 11 p.m. expecting the lines to have died down and for the atmosphere to be scary considering it was so late. Standing in line waiting to go in, I was terrified. Online it was made to seem as if you would get a “Walking Dead” experience, meaning that you would be chased and ambushed by zombies and left to fight them off in order to get to the end, so I was scared and excited. Upon entering I signed my waiver saying that I would obey the rules, given a paintball mask and gun and a guide and sent on my way. Entering the building with its dark corners and twist and turns, my adrenaline was pumping. I was ready to be scared and shoot away. However, there was no ambush. There was no chasing. There was no fear. Going through the building I believe that I encountered six “zombies” who actually looked like oversized gingerbread men, lazily groaning and moaning until you shot them one, maybe two times while falling to the floor. I’ve been scared more by the power going out. Where was the terror?

The attraction itself was said to have lasted a total of 20 minutes according to the Atlanta Zombie Apocalypse website, but our “attraction” lasted 10 minutes. Our tour guide was pushing us to go fast before we were ambushed, but let’s get real. There wouldn’t have been an ambush. I knew this because my tour guide forgot to turn off his walkie talkie, leaving me to hear that not only had one of the “zombies”  gone on “lunch break” but that one was leaving because his mother was waiting on him outside. This wasn’t like the “Walking Dead” at all. My friend, who saw how upset I was on the waste of time and money, tried to reassure me by saying that maybe half of the zombie actors had left and that maybe we should come earlier next time, but paying customers should get the full scare. Even if I show up at the very last minute, I should be able to get the “immersive Horror Attraction like nothing seen or experienced before.” Instead I got three zombie kills and paint on my jeans. Overall, the zombie shoot was not worth the money to me. I did not go to the haunted house attractions that were a part of the attraction, but judging off of the shoot-out, I would probably think twice before going anyway. Save your money… if you dare!