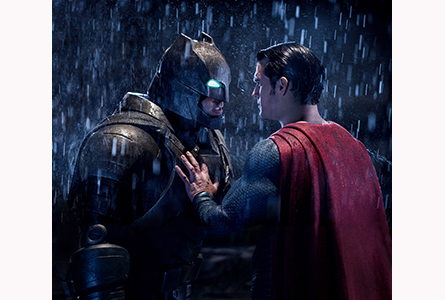 “Batman v. Superman: Dawn of Justice” is not a classic comic hero movie, yet it is not a total clunker either. Rotten Tomatoes gave the movie a 29 percent approval rating, but it is much better than the dud many critics claim it to be. The film is filled with action-packed scenes and jaw-dropping special effects. For some moments of the movie, a rewind button is needed to catch subtle details and high-flying physical feats. The movie is a solid watch; it is not the staggering flick that many expected it would be though.

The back and forth between the two heroes was the best part of the movie. Batman’s (Ben Affleck) mix of power, elusiveness and intuition are on display during the bout while Superman’s (Henry Cavill) divine strength and vision made for an exciting match-up that many waited for. Viewers only get one 15-minute spell between the two, which was a disservice, but every minute was worth it. The two titans put on a show for the ages.

While the film offered entertaining interactions between two iconic comic figures, the plot was messy and partial. Too many pieces were missing from the puzzle. Why are these two saviors actually at war? The film confirms the rift between Batman and Superman starts two years prior to the start of the film, after Bruce Wayne witnesses Superman demolish everything, including Wayne Enterprises.

Batman and Superman are both unstoppable forces that no one understands. Neither can be contained, which makes the public uneasy in the film. Each hero is fighting for justices in their own ways. Viewers would think that these alpha males would make a great tandem. As the movie progresses, it is obvious that both characters have a disdain for the other. Both heroes are indignant because there is another powerful being in town vying for the affections of the people and causing chaos. However, the tension between Batman and Superman was not covered enough to give it meaning. This would have made the movie more suspenseful. To actually address the point of the movie would have done wonders for the entire film.

The movie needed to share more background on several characters, such as Wonder Woman (Gal Gadot) and Lex Luthor (Jesse Eisenburg). Luthor was the Riddler’s clone rather than his own character. Luthor’s character felt forced at times; he was more of a wild lunatic than a cunning businessman as seen in the comic books.

Wonder Woman was perfect. Her character was executed well, and her performance dazzled viewers and increased anticipation for the Wonder Woman movie, expected to release June 2017.

Wonder Woman’s back and forth with antagonist Doomsday showcased her power and agility. This is arguably the best character in the movie. The only negative: she was underutilized. The film could have used more of Wonder Woman’s charisma and domination.

Affleck as Batman was exceptional, but his Bruce Wayne performance was lacking. Christian Bale set a high standard as the pre-eminent Batman in “The Dark Knight” trilogy, but Affleck held his own as the Caped Crusader. The Batman character is best when he methodically and surgically dismembers every villain around him. Bruce Wayne was clumsy and unconscious, traits that do not suit the role. In some ways, his character was rushed. Affleck’s performance was good, but the presentation was hazy. It was as if the Dark Knight was a foreigner in Gotham without the proper introduction.

Though the movie shared plenty of detail and sneak peeks for future reference, these details held no significance or weight. Of course, director Zach Snyder did this in an attempt to create buzz for the Justice League movie due to come out next year. The movie gave glimpses of Aquaman, Flash and Cyborg, which definitely aroused the anticipation for the next DC Comics movies. But the references overshadowed the movie’s plot.

These teasers take away from the focus of this movie and created a ton of clutter in the film. It was confusing at times because viewers could not tell what direction the film was going because of the overflow of information on screen. Whether it was Batman’s dreams or Superman’s soliloquy, the narrative was not connected during the entire cinema.

The most glaring weakness in the film is Superman’s role as Man of Steel and Metropolis journalist. We know little about either as the narrative omits the totality of Superman. Both sides of Clark Kent are referenced but not featured enough to actually understand who Superman is other than a powerful deity wreaking havoc around the world.

“Batman v. Superman: Dawn of Justice” is an entertaining, yet puzzling, piece of work. At times, the movie felt like a preview for movies to come instead of a story about two iconic figures. It was a miss in some areas, especially in its script and plot, but despite its deficiencies, it is still a fun film, especially the last hour of it. For those who are true Batman and Superman fanatics, this movie will fascinate and frustrate at the same time.