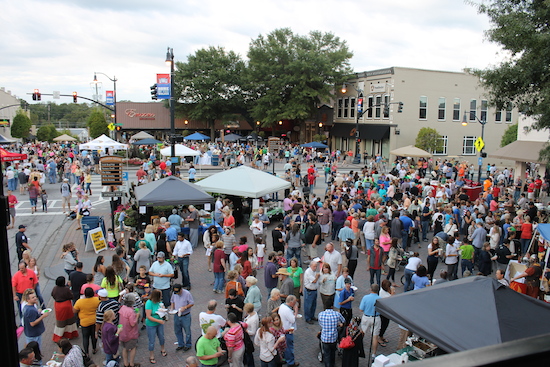 Close your eyes and imagine the most eclectic culinary landscape possible. Now, imagine that place confined to a two block setting in an event offering an endless supply of delicious dishes and locally brewed beer. Welcome to the Taste of Carrollton.

Move over Atlanta, Carrollton is prepared to redefine the meaning of country living. The Main Street of Carrollton is one of the biggest contributors to the momentum that the city is gathering. Phoebe Ericson, director of Carrollton’s Main Street, said that it is the diverse make-up that has Carrollton in such an advantageous position.

“Carrollton is moving, we are primed to jump off of the map,” said Ericson. “And it’s because we have great merchants, beautiful downtown, wonderful students, the university helps tremendously and now we’re partnering to do more things than we ever have before.”

What is surprising is the amount of hidden gems there are to explore in Carrollton. Little Hawaiian, a seafood grill and tiki lounge, is one of West Georgia’s best kept secrets. It is also the reigning restaurant of the year and has been since 2009. This lounge is serving up quality dishes daily, with ingredients that Chef Tano Phommasith purchases from local farmers. In fact, the restaurant purchased the bulk of their ingredients for the Taste of Carrollton from local merchants.

“They are buying all local food, everything that is possible for them to get from the farmers,” Ericson said. “They put their best foot forward all of the time, they bring it.”

For this year’s Taste of Carrollton, Little Hawaiian served two entrée samples, a tuna and seaweed boat. For the tasters that prefer heavier options, meatloaf with gravy on mashed potatoes.

“I honestly had to go back and get more,” said Justin Juene, a UWG student. “The presentation is second to none.”

The winner of the Taste of Carrollton is determined by a three judge panel. The judges’ criterion takes the presentation of the dish and taste into account. Restaurants such as Plates on the Square and Farm to Fork Deli have been edge in those departments in recent years.

Unlike in previous years, this year’s Taste of Carrollton will crown three winners. There will be a winner of Best in Town, Best on the Square and Best Overall. The winners are expected to be announced this coming week.

A serious argument could be made for most, if not all of the restaurants that participated in the event. But realistically, only three can win, and if the length of your line is any indication as to who will win, Plates on the Square has two legs up on their competition. Their line stretched from what is usually their front entrance, to the center intersection of the downtown square. Plates served savory favorites like rib eye steak, grilled salmon and caramel apple cheesecake for dessert.

A pleasant surprise of the event was a quiet restaurant named Alley Cat. A rather small establishment located on the square, they are used to serving up all of your favorite meat sandwiches, but for a change of pace they offered a creamy broccoli casserole for the tasters. Alley Cat is another restaurant that purchases meats and other ingredients from local farmers.

But if you’re looking for the ultimate in fresh food, look no further than Farm to Fork Deli. Sebastienne Grant and Bernie Wong are the co-managers and are constantly whipping up homemade favorites. The deli works in conjunction with the Farmers Fresh Community Supported Agriculture and they share the establishment. Farmers Fresh is a community supported agriculture market providing fresh veggies and local meats for the deli and local shoppers.

On the menu for the tasters was an Indian chicken masala dish, prepared by Sebastienne, along with Apple Normandy for your sweet tooth, prepared by Bernie. Farm to Fork is the spot that will fill all of your vegan, vegetarian or meat craving needs.

This also marks the third year that the Food and Brew package was offered. With the purchase of a package you receive a wristband for unlimited beer, a Taste of Carrollton souvenir cup and five tickets for tasting. Red Hare Brewery and Tour de Fall were the featured selection and are local Georgia breweries.

To top everything off, the night concluded with a concert by Michael Martin Murphey at the AMP. Tasters took off with their food and made their way to the square’s backyard where the country idol performed for free.

And the fun on Main Street does not end with the Taste of Carrollton; Ericson wants this event to snowball the city into the holiday season.

“I mean it gives me pleasure, it just tickles me to see everyone having a good time. And this is only the beginning. This is kicking off our fall events, and we hope to bring the students out this year,” she said. “Just great events planned all the way up to the lighting of the square for Christmas.”