Beyonce’s proteges, Chloe x Halle, released their album The Kids are Alright on March 23. Since they were signed to Parkwood Entertainment in 2015, Chloe and Halle Bailey have been hard at work to break into the music industry. The duo’s music has been featured in multiple films and television shows and they have released multiple EPs and mixtapes, but The Kids are Alright is the sister’s debut album. 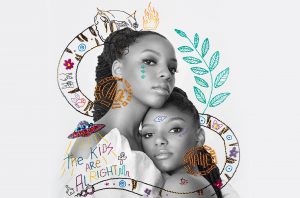 Chloe x Halle, who grew up in Atlanta, began singing at the ages of 13 and 11. The duo would record themselves singing covers of popular songs and post them on YouTube. One of their most popular covers was of Beyoncé’s hit song, “Pretty Hurts.” Their unique rendition and powerful vocals garnered the attention of the singer and they were then signed to Beyoncé’s record label, Parkwood Entertainment. The duo are now 19 and 18 years old and write and produce their own music. They have created songs for the movie A Wrinkle in Time and they also created the theme song for the show Grown-ish, which they also star in.

The Kids are Alright does not follow a particular genre. It is heavily influenced by R&B, but the sisters also drew inspiration from pop, blues and rap to create their sound. The album features 18 tracks and each song on the album is completely different and draws inspiration from different genres.

Each song on the album is written by the Bailey sisters and is also produced by the oldest sister Chloe. One unifying aspect in the album is the sisters incredible vocals. Chloe’s voice is very mature and husky while Halle provides a softer and more melodic voice. The album showcases their talents by creating intricate melodies and harmonies. The duo incorporates a few features on the album from rappers Kari Faux, Joey BadA$$, and GoldLink. Out of the 18 tracks, there are multiple stand out tracks that define the sisters unique sound.

The titular track, “The Kids are Alright,” was released as a single and it was also featured on the show Grown-ish. This song showcases the sisters ability to create beautiful melodies and harmonies. At certain points in the song, it sounds like a full choir is singing with the sisters, but it is just the complex production that Chloe provides. The song’s message let’s listeners know that their generation is full of people who are able to stand on their own, work hard and have fun while doing it.

The song “Hi Lo” is the album’s most mature and mainstream song. The song includes a deep and sultry verse from Chloe and a light and harmonic verse from Halle. The sisters then combined their voices for a hypnotizing chorus. The sisters cover sensitive subjects in this song such as embracing their insecurities and the high points in their lives. The song also incorporates an upbeat rap verse from GoldLink.

The song “Everywhere” is the album’s unexpected trap banger. The song pulls inspiration from rap and hip hop with its braggadocios lyrics. The song incorporates complex production and intricate vocal layering. In the song’s lyrics, the sister duo talks about how their newfound success and how they have “money everywhere.”

Chloe x Halle reinvents R&B in their own image in The Kids Are Alright. The duo show that they are now a force to be reckoned with this new album. Even though the album is their debut, the sisters show that they are ready to take the music industry by the horns.