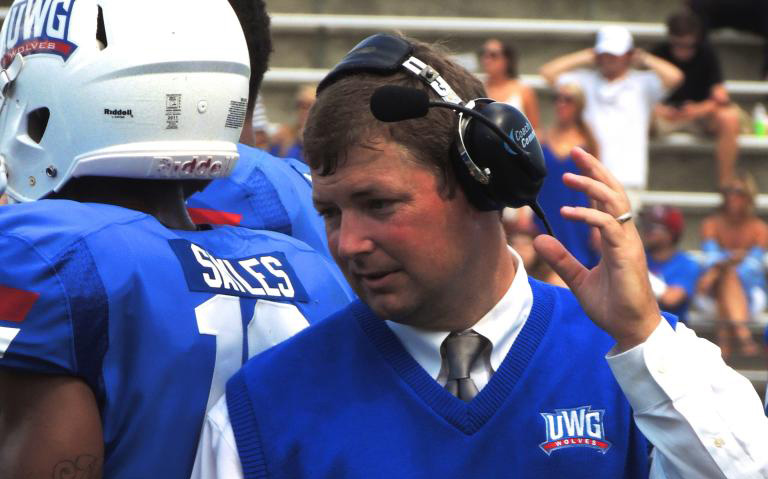 For the first time since 2008, the University of West Georgia football team has a new head coach. Will Hall, former two-time Gulf South Conference Coach of the Year, will replace Daryl Dickey, the previous coach from the last six years. Hall was the head coach at the University of West Alabama Tigers for three seasons, where he won back-to-back conference championships.

But when Hall began to weigh his options on where to further his career, the obvious choice was Carrollton.

“The administration, the forward thinking, me and my wife thought it was a great next step for our lives,” he said.

The decision has great implications, especially for the football program. Hall is coming off of his second Gulf South Conference winning season. This is important because the Wolves compete in the same conference. A conference in which Hall holds an overall 11-3 record and is 9-1 in the past two seasons.

He also went undefeated last year against five opponents that the team is scheduled to play; a comforting fact for match-ups this season. In the end, this coaching change could spell the beginning of a turning point for the Wolves.

Couple those advantages with a problem that has plagued the Wolves, the results could lead to a breakthrough season. Last year, the Wolves lost two games to Midwestern State University and Valdosta State University respectively, each by 10 points or less. The Wolves also lost a third game where they trailed by one possession at halftime to University of North Alabama.

Hall and his staff sense that better second half efforts could transform this team and turn losses into victories.

“I think there is just a consistent conversation about being physical, and being relentless and giving great effort and that’s all the time.”

Second half efforts have not left the Wolves satisfied in past encounters. This is an extremely wide category, but with improvement from the team, it would offer the entire University confidence in their football program.

If there is to be a change of culture for this football program, it begins and ends with the support from the school it represents; a support that would come especially from the students.

“We need to be in this thing together, so when we win and do great, I want them to party and be right with us,” Hall said. The season opener against Mars Hill University saw the Wolves seize the lead and never look back, winning their first home game 38-26.

When asked if there was any meeting in particular that Hall had circled on his calendar, he said, “The only game we have highlighted is Valdosta. We talk about Valdosta every day.”

In any competition winning against your biggest rival is pivotal to success. Unfortunately, the game will be played in Valdosta, so students will have to travel to support the team.

However, there happens to be a date that is just as important if not more so. The week five match-up pits Hall against his former team, the University of West Alabama Tigers. For Hall, this game is pivotal. It serves as a rough obstacle, and establishes momentum for a team that is searching for success.

Coach Hall is optimistic about student attendance and is hoping to be impressed.

The new era in UWG football has been mentioned, but it is only as permanent as the fans make it. So students show up early, stay late and remember to howl as loud as possible.