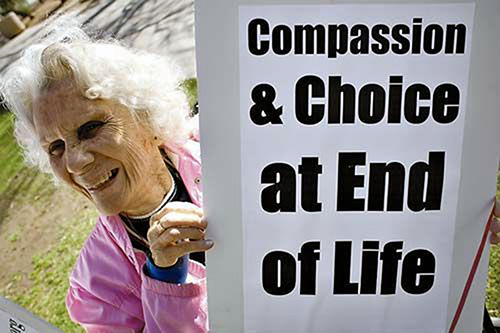 Life is filled with uncertainties, but one thing is definite—death. We all know it has to come one day. The scariest part is not knowing when or how it will occur. Society often represses the idea and talking about the subject makes us cringe. It is an uncomfortable subject, but we should be able to openly talk about it without seeing it solely as a dreadful thing.

What would you do if your loved one were diagnosed with a terminal illness? They only have up to six months to live, but the fact of the matter is that they are no longer living; they are waiting to die. If they had the option to no longer suffer and die with dignity, would you support it?

According to the Death with Dignity National Center (DDNC), the states that currently allow physician assisted suicide are Oregon, Washington, Vermont and Montana. Each of these states has certain prerequisites in order to go through with the Death with Dignity Act. An individual must be 18 years of age or older and must be a resident of that state. They also must be capable of making health care decisions for themselves and must have been diagnosed with a terminal illness that will lead to their death within six months. Less than 800 individuals have used the liberty of the Death with Dignity Act (DWDA) since 1998 in Oregon and less than 600 have exercised their right to die with dignity in Washington State since 2009.

Oregon was the first state in the United States to pass the DWDA law in 1997. This law allows those with a debilitating illness to take a lethal amount of barbiturates, such as Nembutal or Secobarbital, to assist in ending their life. They have to fill out a request to go through with the DWDA. Once signed, the people are not forced to go through with it, but they do have the right to choose when they feel it is time.

Volunteers from a group called Compassion and Choices assist most of those who use the law. When the individual is ready, one of the volunteers will prepare the medication by prying open the capsules and mixing the powder with a small glass of water. Generally, family and friends are present to show their support and give their last goodbyes. In the documentary by Peter Richardson, How to Die in Oregon, some of Cody Curtis’ last words before his physician assisted suicide were, “This is easy so, I wish people knew how easy it was,” as she was slowly falling into a coma.

Those with an opposing view say that this is inhumane and that doctors are murdering these persons. Doctors are not killing these people; this is not homicide nor is it stereotypical suicide. Suicide is defined as ending one’s life when they can no longer deal with their depression and other mental health issues. These individuals, who are in excruciating pain, are not giving up on life. They are giving up the pain. Skeptics will also say that this goes against any moral right, but it is also immoral to let people suffer until their death. Most of these individuals reported that their main end-of-life concern was losing autonomy and not being able to function individualistically.

I strongly support the Death with Dignity Act because it offers individuals suffering from tremendously painful terminal cancer or other diseases an opportunity to choose to die with dignity, not in agony. They are given the chance to decide when enough is enough and not wait to die. With cancer being the second greatest cause of death for Americans, according to Centers of Disease Control and Prevention (CDC), I believe more states should implement this plan. Family and friends do not have to see their loved ones die in such a ghastly way. These people deserve the right to die by their own choice when they no longer feel they are truly carrying out a functional life due to their encumbering illness.

Brittany Maynard, the 29-year-old who recently took her life with the DWDA created awareness with her heartbreaking story that went viral.

“To have control of my own mind, to go with dignity is less terrifying,” said Maynard in an interview. “When I look at both options I have to die, I feel this is far more humane.”