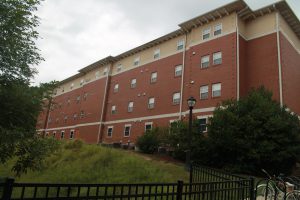 At approximately 2am on Aug. 19, a UWG student reported an apparent leak in the resident hall’s main stairwell to the university’s 24/7 response team, Res Star.

Further investigation from the response team revealed that the leak was a product of the University Suites 2 sprinkler system.

“The sprinkler system is a very high-pressured system, so when that leaks it wasn’t just like a drip—it was a straight spray,” said Residence Life Coordinator for the University Suites, Becky Pritchett. “It was very obvious that it was spraying some water.”

The damages from the flood contributed to the displacement of 19 hall residents to the Carrollton Holiday Inn. The affected students were provided a shuttle back and forth to campus each day as needed.

“Luckily, not a lot of student property was damaged because the leak was in our stairwell,” said Pritchett. “The stairwell was damaged, so we had to redo that. I would rather it be that than having our students’ items get damaged.”

Continuous investigation is underway by the University of West Georgia Police and Risk Management Team.

“There was a gauge that came loose, and I don’t think someone could just accidentally knock a gauge off like that—it’s tightly wound,” said Pritchett. “If someone did that they had to sit there and completely unscrew it, which is rather vindictive. I would hope that it wasn’t a student doing it. I’m hoping it was an error, but they are still trying to figure that out completely.”

Cameras are not currently located in the stairwells of the University Suites, so the incident was not caught on camera.

“We are always looking for ways to increase our security,” said Pritchett. “This was a very odd incident and I don’t foresee it happening again, but we always want to do our best to keep our eyes and ears out to make sure it doesn’t.”

“We had our Director on campus, our Vice President of Student Affairs on campus—we had a lot of folks who were willing to get up and come to campus at 2 in the morning and help out with this incident,” said Pritchett. “It was really nice to kind of have everyone there so we could make those decisions and get things moving very quickly so that we could rectify the situation.”

After approximately 3 weeks of displacement, the students returned to their dorms on September 8th.