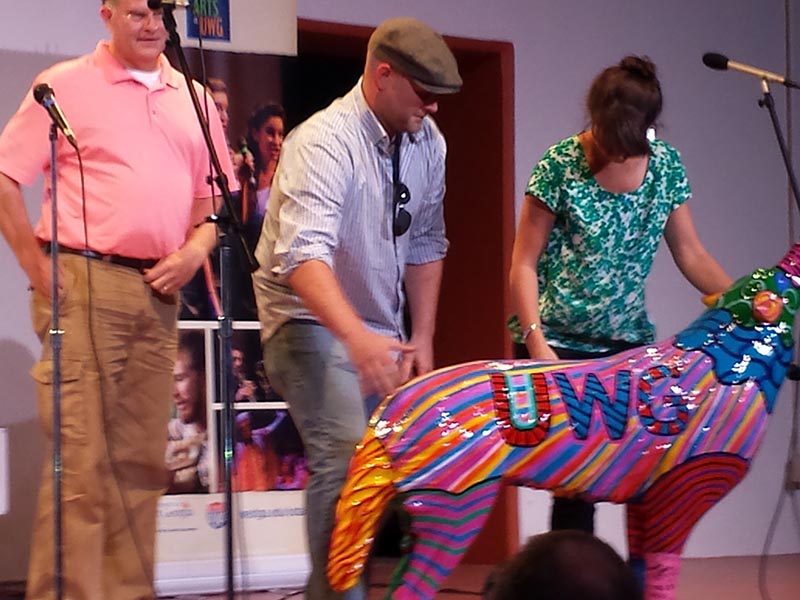 The University of West Georgia showcased the talent and creativity of the College of Arts and Humanities Sept. 28.

The Eclectic Live show featured music, poetry and short stories, fused together to create a stage show to entertain the Carrollton community.

The UWG Marching Band, the Sound that Lights the South, opened the show, sending robust sounds of well-known tunes such as Michael Jackson’s “Thriller” and Aerosmith’s “Sing for the Moment” into the streets of Adamson Square. They were accompanied by twirling majorettes, a dance line with pom-poms and UWG’s mascot, Wolfie.

The event also saw the return of one of the vandalized wolf statues, which was found badly damaged on Lovvorn Road on Aug. 19. Police have charged two UWG students in connection with the theft. This wolf, along with six others, will be debuting at UWG’s Homecoming game on Oct. 5.

Diamond Forde, the managing editor for the 2013 publication of Eclectic, read two original works. The first was a poem titled “Interracial Dating,” it was vivid depiction of public scrutiny in private matters, and her second poem, “The Word” was a description of Forde’s experience with a study abroad program in Italy.

J.A. Miller, the interdepartmental submissions editor for Eclectic, read an excerpt from his original story, “Click” and stopped at the perfect cliffhanger ending.

Jordan Moss, a UWG English major, read two original poems, one about her mother’s experience on a flight, entitled “Sean Connery Flies Delta First Class” and the second left untitled made the profound assertion, “I was here; I am here.”

Songs from UWG’s upcoming musical “Once on this Island,” such as “Waiting for Life to Begin,” “Forever Yours” and “Some Girls” were also performed. The show debuts at the Townsend Center on Oct. 8.

Amadi Ozier, a graduate of UWG’s English department, read an original piece called “Blind Item” about an actress, Juli, and her struggles.

Jenna Harvie read a piece entitled, “An Autobiography Through Costumed Characters” which presented a humorous tale of “unashamedly ashamed sexuality.”

The evening also featured several testimonials from students eager to share their experiences about their voices at UWG, and awards were distributed to the four best-dressed tables, with the Department of Art taking home first place.

The event was sponsored by Roenigk Digital Craft, the Carrollton Evening Sertoma Club, the Times-Georgian, Plates on the Square, the Irish Bred Pub and Underground Books.