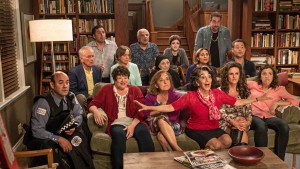 The sequel to “My Big Fat Greek Wedding,” released by Universal Pictures on March 25, will have you crying, “Opa!” It was a long 14 years for fans wanted to know what was going on in the lives of the Portokalos. The movie brought back many memories—from Gus religiously using Windex to Aunt Voula telling personal stories about discovering her body growing up.

The movie picked up with Toula (Nia Vardalos) and Ian Miller (John Corbett) bringing up their stubborn teenage daughter, Paris (Elena Kampouris), who looks at colleges to attend after graduation. Paris fights with what her mother fought with before; before Toula was married, she was smothered by her Greek family, who now tells Paris to find a Greek boyfriend.

The plot primarily follows Toula’s parents: Maria (Lainie Kazan) and Gus (Michael Constantine). Gus was told he could find out who his ancestors are, and he becomes determined to find out if he is related to Alexander the Great. While doing this, he discovers his marriage license between Maria was never signed by the priest.

The priest says he will sign the marriage license if Maria and Gus remarry in the church. The entire Portokalos family decides to work together to throw the best wedding for the couple. As this happens, Toula has to then work out her marriage with Ian because they have grown apart.

As with most sequels, the story touched those familiar with the first film. Jokes recycled from the first film had the entire theater laughing, and the audience had an emotional attachment to the characters because of their resemblance to any crazy family’s life.

Despite the nostalgia aspect, the movie was a bit too cheesy. The writers tried too hard to bring back life from the first movie. Some jokes were not quite knee-slappers and even some seemed redundant. The jokes in the first film were golden but seemed forced in the second film. Yes, the fans were satisfied the movie stayed true to its colors, but the movie played it too safe.

The movie was perfect for the fans because the original movie was a sleeper cult film, and the sequel brought answers to the waiting fans. Sadly though, despite the first film being a cult classic, the second film did not live up to the first film. “My Big Fat Greek Wedding 2” lacked potential because it had been 14 years since the original, and the production quality was poor. This sequel was just like any other sequel to a critic. To fans, it was a movie worth waiting for.