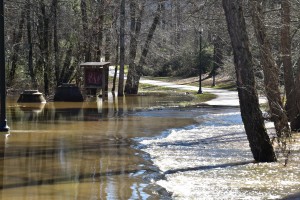 Over the past few weeks, the University of West Georgia (UWG) has faced severe flooding across many parts of the campus, including the Coliseum back path. This path is important because it serves as a route for commuter students.

On Saturday, Jan. 16, the Coliseum back path flooded for the second time this year. A large tree that stood on the bank fell into the Little Tallapoosa River. The path had been constructed to withstand floodwaters, though the bank is creeping its way toward the path.

“During significant rain events, the Little Tallapoosa River will overflow its banks and encroach upon the adjacent land,” said UWG Risk Manager Matt Jordan. “This has a positive effect in that it alleviates destructive flooding down-river.”

Some infrastructures were affected by flooding, such as the path to the Grove and the Greenbelt, even though these are engineered to accommodate periodic flooding.

The UWG grounds staff is always making sure the path is clear of any debris during heavy rainfall and other destructive weather; however, the staggered debris does not seem to be an issue. The major concern is not with the path itself but the area the path lays on. Two trees that held the riverbank together fell and caused the river to widen.

“The path seems to be a little close to the river,” said UWG student Alyssa Sibilia. “Every time it rains, it seems that the river widens. It might be fine now but one day the path might fall into the river.”

Quite a few students are now irritated with the back path due to the frequent flooding. The river is now less than eight feet from the back path. Before the trees on the riverbank fell, their roots kept the river’s edge in place. Now, every time the Little Tallapoosa floods, large parts of the bank erode, causing less space between the river and the path.

Jordan has reported that the Coliseum path is safe to take. Students may continue to venture off through the nature trails and walk on the back path. When there are heavy rains, it is suggested to avoid the back path if there is any flooding. Treading through any high water can be dangerous due to strong currents and debris that may be floating in the water. If the Coliseum back path is flooded, the campus bus stop will still be an option as well as carpooling to campus.