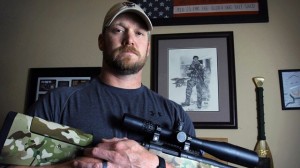 Police have apprehended a suspect in the shooting, a 25 year old former Marine, Eddie Ray Routh.  Kyle and Littlefield brought Routh to the shooting range in a therapeutic effort to help him with his posttraumatic stress disorder (PTSD), developed during the war in Iraq.

Routh used a semiautomatic handgun to shoot Kyle and Littlefield multiple times before fleeing the scene in Kyle’s truck. Police apprehended the suspect later that evening and Routh is now facing two capitol murder charges and is being held under a $3 million bond.

From 1999 to 2009, Kyle was a member of the United States Navy and was part of the elite special operations force known as the SEALs. He was assigned to SEAL Team 3, sniper element, and served four tours of duty in the war in Iraq. During those tours, he had 160 confirmed kills. Kyle was also involved with helping American veterans who returned home from the war and had trouble dealing with PTSD, assisted by his longtime friend, Littlefield. He was passionate about giving back to the men and women who serve this country and wanted to help with problems that he could also relate to. Kyle’s funeral service was held Monday, Feb. 11, at Cowboys Stadium in Arlington, Texas where around 7,000 military personnel and civilians were in attendance.

Kyle’s death is a tragic reminder that, for many veterans, the war does not stop when they return home. It often leads to a lifelong battle to overcome the horrible nature of war and the tragedies seen by these men and women while in battle. Anyone who has served in the military, during combat or peacetime, deserves to be held at the highest standard in reference to their character and willingness to help those who cannot help themselves.

According to the United States Department of Veterans Affairs, after 2005, there was a 30 percent increase in PTSD claims by veterans returning home from the war. In 2008, a study of 1,938 veterans from Iraq and Afghanistan showed that PTSD was prevalent in 13.8 percent of the participants. Even though this is a disorder that many men and women who have served may not like to talk about, it is our job as grateful citizens to help these veterans with a disorder that they may not know how to deal with. By bringing awareness to this issue, we may be able to help people like Routh and stop violence like this from occurring again.

As someone who has not served in the military nor been in any sort of combat, it is hard to imagine what veterans go through upon their return home. Talking with some of these veterans or helping out at VA events and hospitals is a great way to not only better your knowledge of what they have been through but to also help them express some of the feelings that may be bottled up inside. If doing so helps even one veteran in the slightest way, it is a step in the right direction.

The tragic death of an American hero should not be the catalyst for public awareness about PTSD but with the help of the citizens that the military protects, perhaps we can prevent such an act from happening again. Chief Petty Officer Christopher Scott Kyle was a true hero and an inspiration to many, who was tragically taken from us far before his time. Thank you for your honorable service to this country and may you rest in peace.