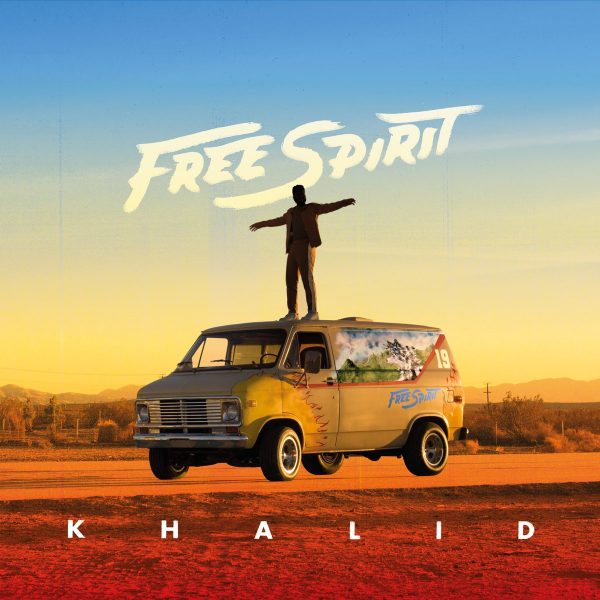 Singer and songwriter Khalid hit the music scene in 2016 when his hit single “Location” blew up across the nation and reached number 16 on the Billboard Top 100. His debut album American Teen was released two years ago, and over the years Khalid has reached mega-stardom.

Khalid’s sophomore album, Free Spirit, was released on April 5, 2019. The Billboard winning artist battles bad situations or bad feelings and good intentions on the 17-track album that continues the seamless blend of pop with R&B vibes from his American Teen days. Now at 21 years old, Khalid’s Free Spirit has a more mature sound and shares experiences from both failed relationships and friendships.

“Intro” is a vibrant track that lays out the entire vibe for the album. The song is a full three minutes which differs from typical album intros. He sets the scene for the first half of the album all about failed relationships. In “Intro” he sings about his stage of grief after the relationship goes south. “I can’t even live with being by myself/ That’s the part of me that really needs your help.” The honesty in his lyrics on this song meshes well with the meaning behind the song and gives a familiar feel to how relationships pan out.

The lead single off of Free Spirit, “Talk” is simply about just wanting to communicate which Khalid is known to sing about. Dating in the digital age has made communication about feelings more complex than ever before. The beat has an R&B vibe with hints of Dance thanks to the duo Disclosure being featured on the track. “Talk” is a fun song about determining a relationship by just communicating to one another.

Free Spirit has an array of songs but for the same mood. Khalid embodies the title of the album very well, you can see it in his personality when he performs and feel it through each song and lyric. The album also has an accompanying 45-minute short film by the same name. He is honest with his lyrics and lives a truth many young adults live but he has the platform to share his ideas and stories with millions of people. Khalid has shown that he is on a path to freedom and has a love for the music and living his best life.

The album and short film together are a perfect reflection of the amazing artistry that Khalid has to offer and wants to share what he loves and feels. Free Spirit deserves a five star rating because honesty and truth speaks volume through more than one medium. As a young man who has this content out for fans of all ages and races and backgrounds, Khalid finds some kind of common ground to stay relatable and it is a beautiful thing to watch and enjoy.