Skip to content
In the Atlanta Braves’ four year absence from the MLB postseason they managed to build one of the most heralded collection of young players in the league. Patience has been the keyword throughout the rebuild.
The Braves suffered through abysmal seasons during the process, losing at least 90 games in three consecutive seasons from 2014-2017. As Atlanta’s young talent continued to develop and show its legitimacy fans could feel the tide slowly turning and the clock began ticking a little faster for the Braves to get back to relevancy.
The 2018 season was expected to be a big step forward towards relevancy after the 2017 season saw several of Atlanta’s notable prospects begin to flourish. They were not expected to compete or win many games. The general consensus: the Braves are still a year away from competing for the playoffs. The Braves had other plans. 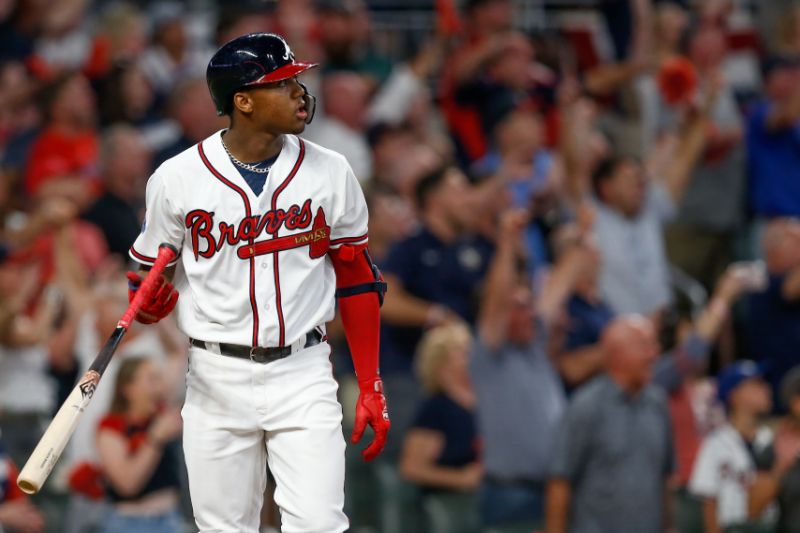 “This season was a jumping off point for the Braves,” said Sam Meredith, Braves writer for TalkingChop. “A lot of rebuilding teams struggle with the trek back to the playoffs (see Phillies), so for Atlanta to get back just four years after they started rebuilding is a credit to how good the team will be moving forward in my opinion. The significance of this season is that it will be remembered as the opening of the Braves contention window.”
The Braves went 90-72 this season, becoming the first National League team to win 90 games after losing at least 90 games in three consecutive seasons since 1991; which was also done by the Atlanta Braves. The immaculate turnaround took incredible efforts from one of the youngest teams in the MLB. Youngsters Ozzie Albies and Mike Foltynewicz emerged as All Stars, while veterans Freddie Freeman and Nick Markakis asserted themselves to stardom as two of the best hitters in the NL. However, the real buzz of this Braves team came from one of the biggest sensations that the Atlanta sports scene has ever witnessed: Ronald Acuña Jr.
“Ronald Acuña Jr. has a chance to be the best player in all of baseball and that’s not an exaggeration,” said Meredith. “He’s got a unique personality and he’s a marketing team’s dream. For a sport trying to revive its fandom amongst the younger patrons he’s the perfect guy. Superstar is an understatement, he’s going to be a megastar.”
Acuña, the frontrunner for National League Rookie of the Year, batted .293 with 26 home runs playing 111 out of 162 games, including one of the most prolific stretches of hitting that the league has ever seen from a 20 year old player.
Over a stretch of eight games in the month of August Acuña accomplished the following: eight home runs, five straight games with a home run (youngest player ever to do so), three straight games hitting a leadoff home run (the longest streak by anyone since 1996), five home runs in six games (the youngest to do so since 1955).
The Braves’ young phenom did not stop setting history there either; in game three of the National League Divisional Series against the Los Angeles Dodgers Acuña became the youngest player ever to hit a grand slam in a playoff game.
The incredible part of what the Braves accomplished this season, despite losing 3-1 in the NLDS, is the fact that this team will only get better. Speculation has suggested that this offseason the Braves will be going all in on adding elite free agents and making potential blockbuster trades to try and pair more superstar-level players with this incredible young core.
“The Braves have the chance for one of the best off-seasons ever,” said Meredith. “They have a rare combination of young talent mixed with an already established superstar (Freddie Freeman) along with one of, if not the, best farm systems in baseball. Match all of that up with a competent general manager and the payroll room the Braves are expected to have and you could see an absolute monster team next season in Atlanta.”
The significance of the Braves’ newfound success this season reaches far past the clubhouse. The Braves are the staple of the Atlanta sports spectrum.
“Seeing as how the Braves are the only professional sports team in Atlanta history to win a title, the significance of them being good again brings a huge boost to the city,” said Meredith. “It isn’t absurd to think that the Braves are the most popular team in Atlanta and now that they’re good again the city has something to rally behind as they showed with their ridiculous turnout for the playoffs.”
Simply put, the Atlanta Braves are back. The 2018 season was the introduction to what is likely to be a dynasty, a taste of greater things that are to come. The future is now.