Two of Georgia Tech’s top basketball players, senior point guard Tadric Jackson and sophomore wing Josh Okogie, have both received suspensions for receiving improper benefits in what has been yet another example of the NCAA punishing players for skeptical reasons.

Both suspensions were fewer than the NCAA’s set lengths for that kind of violations. This is likely due to the fact that these were self-reported violations, in that the news was released to head coach Josh Pastner and he forwarded the information to the school’s compliance office. 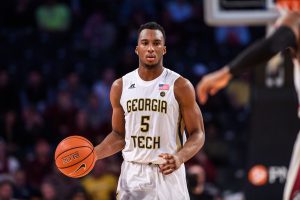 “As I have throughout my career, I remain committed to following NCAA rules,” Pastner told CBS Sports through Georgia Tech’s athletic department. “Any allegations that NCAA rules weren’t followed will be investigated thoroughly by our compliance department while I focus on coaching my team.”

Okogie and Jackson were accused of receiving benefits from an outside source. That source was revealed to be Ron Bell, a resident of Arizona and close friend of Pastner. He reportedly provided things varying from transportation, apparel and meals to both of them. Bell told CBS Sports that Jackson and Okogie were flown to Arizona where Bell purchased meals and apparel for both of them. The benefits ever estimated to be valued to total $525 for Jackson and $750 for Okogie.

Okogie has been able to serve his suspension as games that he was going to miss anyways, as he suffered a dislocated finger in Georgia Tech’s first team exhibition game. It is still unknown whether or not Okogie will be healed and ready to play once his suspension is over, but he should be back before much time has passed this season.

Bell is a recovering addict who spent four years in prison from 2009 to 2013. He and Pastner have reportedly known each other for two decades, and an examination of phone records by CBS Sports showed that Bell and Pastner had numerous phone conversations on Oct. 2. Bell is presumed to have told Pastner what he had done for the two students and threatened to release it all to the public, all according to CBS Sports. Pastner has stated that he had no knowledge of the incident prior to Oct. 2, other than that he encouraged them both to take the trip to Arizona.

While the suspensions have been handed out and the damage seemingly done, this is a dark cloud that will loom over the heads of the Georgia Tech program and certainly damages the Yellow Jacket’s chances for success this season. The rules of the NCAA are strict and rather inequitable, they are rules that must be followed by any and every collegiate athlete and staff member. The best thing for Pastner and his team to do now is move onward.