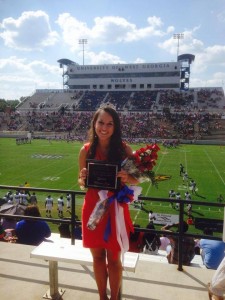 The University of West Georgia crowned a new homecoming King and Queen at halftime of the homecoming football game Oct 5. There were five women and five men in the running for the titles. Signs, posters and buttons were all displayed to show support for the nominees, which also indicated how much this title means to the students on campus. After votes, pageants, interviews and much consideration a winner was determined. UWG crowned Michaela Jorge as the 2013 Homecoming Queen for the university.

“I am beyond humbled to have received the title of becoming the University of West Georgia’s Homecoming Queen,” said Jorge. “I am honored to represent a strong university that has a diverse and passionate student body. This title holds a great amount of value to me because I am dedicated to giving back to West Georgia’s university.”

The twenty two-year-old senior nursing student has been involved in the university and the community since arriving on campus. After she graduates from UWG, Jorge aspires to become a pediatric rehabilitation nurse that serves to motivate children with disabilities to overcome their individual obstacles.

“I enjoy hanging out with my Tri Delta sisters in my free time,” said Jorge. “It is comforting knowing that I have a strong foundation behind me that allows me to make lifelong friendships but excel at the same time.”

Apart from Tri Delta, Jorge has also been on the Panhellenic Council as Vice President Administrative Affairs and an extension committee member. She also has honorary affiliations that include National Society of Collegiate Scholars, Alpha Lambda Delta, Who’s Who recipient, Rho Lambda, Hope Scholar and a Dean’s List recipient. She has received scholarships that include a Nursing Scholarship to study abroad in Budapest, Hungary, Tri Delta Foundation Scholarship and National Alumnae PanHellenic Association Scholarship.

Among all her involvements, Jorge still finds time to be involved in Campus Outreach, be a Student Ambassador and be a part of the Student Nursing Association.

“Although I am very involved I also find the time to do the things I love,” said Jorge. “I like the typical stuff. I enjoy spending time with my family and friends and being outdoors.”

After all of her achievements during her time at UWG, she is still very humble of all the experiences the campus has allowed her to have.

“This university has shaped me into the individual I am today,” said Jorge. “I hope to encourage incoming freshman to take advantage of every opportunity this university offers in order for them to have an amazing experience like I have during the past four years.”