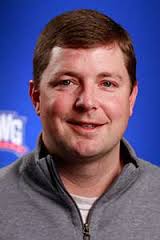 220 miles separate Livingston, Ala. and Carrollton, Ga. This is also the distance the University of West Georgia’s (UWG) new Head Football Coach traveled from one head coaching position to another.

Will Hall spent the last three years as the Head Football Coach at the University of West Alabama (UWA) before recently accepting a position to become UWG’s newest Head Coach.

“This is the best place in the country to coach Division II football,” says Hall.

UWG chose to hire Hall for only his second Head Coaching stint of his career. He served on the coaching staff at Presbyterian, Henderson State, Southwest Baptist and Arkansas-Monticello but did not become a Head Coach until he was promoted from the Offensive Coordinator position at UWA. He has quickly climbed the coaching ladder in his young career.

“I’ve got goals and dreams to coach at the highest level but my ultimate deal is to impact people in a positive way,” says Hall.

Hall had a lot of success in his three years as Head Coach at UWA, winning back-to-back Gulf South Conference (GSC) titles in 2012 and 2013. He also won the GSC Coach of the Year award twice in three years.

Despite plenty of success at UWA, Hall still decided to accept the position at UWG, which also is a member of the GSC. It is not very often where a head coach leaves and becomes the head coach of a conference opponent.

“I think we [UWG] are the best place in the country at our level, when you look at the facilities, the location the town all of that together nobody has got it as good as we do,” says Hall. “The big thing that intrigued me about this place was the community. I have two boys that will be six and three in February and it is just a tremendous community for them to grow up in.”

Hall takes over the team after the former Head Coach Daryl Dickey stepped down. Hall’s big move comes at a crucial period of recruiting season when UWG and every other school is fighting for the most talented high school players.

“This place [UWG] sells itself. You get people to come and see this place and they are just wowed by it,” says Hall. “The facilities, the campus, the town, the community of Carrollton along with the University just have so much to offer.”

It has been more than 30 years since UWG won its last national title. Dickey, who is still serving as UWG’s Athletic Director, believes that they found the guy who can bring the Wolves back in to contention for a national title.

“We’ve got to win the Gulf South Conference and we’ve got to start doing that consistently,” says Hall. “When you win your conference consistently I think eventually things fall in place for you where you win a national title.”

UWG is not considered to be one of the favorites to compete for a national title this upcoming season but there are still plenty of goals that Hall and the rest of the team have for this year and the next few years to come. Winning the GSC title would be huge for the University and Hall has made it very clear that that is what he is here to do.

UWG has had sporadic success over the last few years under Dickey. Hall is inheriting a program that Dickey spent a lot of time building up, loaded with a lot of returning players that were recruited by the past administration. Hall will have some tough decisions in the early stages of his new job.

Hall decided to make that long trip along Interstate-20 and he will certainly have to make a few more of them in the years to come as he faces off against his old team. With the amount of success that Hall has had at UWA it really must be worth it to him to join another program.