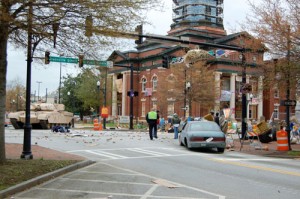 California has been the mecca of feature-length, motion-picture production, in the United States since the early 1920’s. Hollywood is known around the world, and the city’s name has come to symbolize the movie industry.  Still, Hollywood Hollywood is the place where many of America’s greatest movies have been filmed.

With the recent economic difficulties facing this country, movie production studios are looking for cheaper places to shoot their films. Several states offer  lower fees for filming and incentives such as tax breaks to studios.

Georgia is fast becoming the answer to the financial problems of filmmakers. According to the state of Georgia’s Department of Economic Development, “Georgia’s Entertainment Industry Investment Act (EII) provides a 20 percent tax credit for companies that spend $500,000 or more on production and post-production in Georgia, either in a single production or on multiple projects.”

The EII also offers an additional ten percent tax credit to filmmakers who display the Georgia logo in the film credits.  This is a very large incentive for companies to produce their projects within Georgia and helps lift some of the financial burden that would be placed on the companies in states like California or New York.

The higher production of movies and television shows in Georgia brings about another advantage that many other people have been concerned about in recent times and that is jobs.  When a movie is produced it requires hundreds of people to work on the set and to work in the studios during pre and post-production.  This provides a number of opportunities for recent college graduates looking to get their feet in the door at a production studio.  With movies like “Zombieland” filmed in Newnan and “Lawless,” some of which was shot at the McIntosh Reserve near Carrollton, as well as the AMC hit show “The Walking Dead,” which is primarily shot in Senoia and Newnan, there are a number of productions that students are able to get involved with.

The newly built Screen Gems studio at Lakewood offers more opportunities for students seeking jobs in the movie industry.  Screen Gems has delivered many big films such as “Underworld” and “Resident Evil.”

Just across from the Georgia Tech campus, Turner Studios is the place to be if you are interested in the post-production aspect of movies and television. Greg Gause a Senior Sound Designer at Turner said, “Students or recent graduates that are looking to get their foot in the door in this industry should look at being a production assistant.” A production assistant is one of the starting positions in which the employee does whatever is needed by various departments of the production crew. “Once you have experience in different departments it is easier to decide which one you are interested in the most,” said Gause.

The film industry in Georgia may not be as large or as noted as Los Angeles and New York, but with major television series and blockbuster movies being filmed and produced all over the state, it certainly provides many opportunities for students and graduates who are looking to put their skills to work doing something they enjoy.