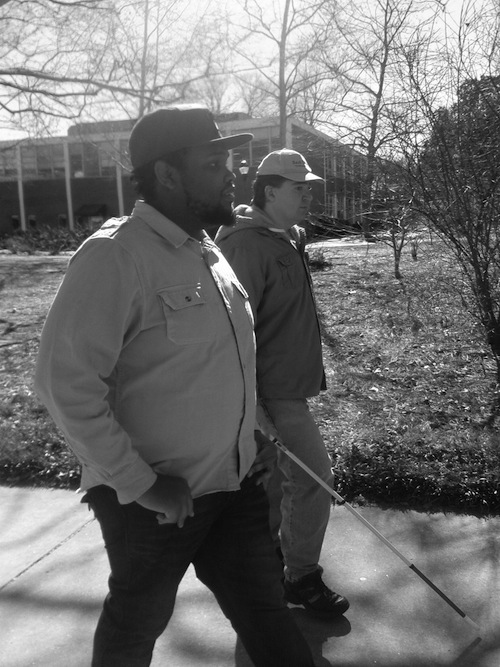 As he stands outside of East Commons Dining Hall asking each student a guest pass, the students of the University of West Georgia wonder whom this bold kid is asking for food. He walks around campus rapping songs about food and life, and with each tweet he posts the name beside the status reads “@HeWillRap4food”. As hungry as he seems, Dejaun Gayle is more than just hungry for food, he is hungry for a peaceful life.

Gayle, better known as ‘Hungry,’ is a junior at the University of West Georgia (UWG). He is known on the UWG campus for being a rapper/poet but there is more to Hungry than just food, hot lyrics and a nice flow. Hungry holds many positions on campus; he is the Vice President of Eccentrix, an organization on campus that is dedicated to freedom of express through artistic expression. He works Weekends West Georgia and he works in Accessibility Services helping disabled students gain more access to whatever they need on campus.

“My main objective is to be a servant to other people,” says Hungry.

One of the ways Hungry is a servant to others is by helping them find their greater peace and by doing so he says he finds a better peace within himself.

“Peace is a state where you’re happy for everything you have in your life,” says Hungry. He elaborates on his version of peace and explains how it’s hard to obtain. “Anybody I am close to that does not have peace, I try to encourage them and uplift them and help them obtain their level of peace.”

The origin of “Hungry” came from his days in middle school when two girls petitioned someone to make a song about chicken to the R. Kelly song “Ignition”. Hungry remade the song and called it “Give Me Some Chicken”. His friends said that he should have a stage name and proceeded to call him M.C. Burger, but Gayle did not like the name and said “Why not just call me Hungry.” Throughout his years of grade school and up to college days, Gayle’s name and stage name is known as Hungry.

Through artistic expression, Hungry finds himself inspiring students and others every day. Hungry has had some life battles that has not always allowed him to have peace but once he discovered the world of poetry and music, his peace was on the way.

“I am a daydreamer,” says Hungry. “I developed escapes to find a better peace for myself.”

Hungry began to rap to show those who thought less of him that he would make it and become somebody, but instead, he discovered so much more about himself. He says a famous rapper by the name of Brother Ali inspired and encouraged him to become better self-aware.

“I started rhyming just to be somebody, I found out I already was.” – Brother Ali

On his journey to his ultimate peace, Hungry has become more hungry for things other than just food.

“I am hungry for food first and foremost,” says Hungry, “so if anybody is reading this and has a guest pass definitely send it this way.”

Being the jokester that he is, he further explains what and why he is hungry.

“I am hungry for equality, spirituals, good vibes and good people.”

Though humble, meek and mild, Hungry is here for the people with his jokes and ability to twist and rhyme a word. “At the end of the day I just want to see people happy,” says Hungry. Hungry encourages everyone to be themselves. “Never be a carbon copy of anybody. When you finally break out of that shell and you see your true self, life is going to be so much more worth it.”