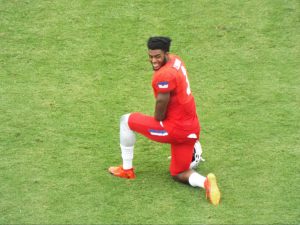 The season has just started and safety Zed Brown has tackled the charts with 7 tackles and a 65-yard interception along with a touchdown. Two years ago, being a freshman on special teams was not easy for Brown. However, he worked hard to establish a position on the starting lineup. Brown is entering his third year at UWG and is displaying an upward trend for the team.

Last season, Brown ended with 38 tackles along with intercepting two passes and recovering a fumble. The highlight for Brown was during the game against Miles when he helped bring his team to victory. During the fourth quarter, the defense made a strong impact as Brown hauled in one of two interceptions against the Golden Bears in the quarter.

“It was a pass that was thrown straight to me; I knew that I just had to capitalize on it. The end result led me to the end zone,” said Brown. “It always feels good to make a play, I was just happy to make a play for my team.”

The game against Delta State got difficult for the Wolves at times, but there was no doubt that the Wolves would steal another game and remain undefeated.

“We were studying our plays, watching film and trying to pick up on their tendencies. Primarily, we needed to watch their quarterback and their running back,” said Brown. “They’re probably the two best we’ll see all season. We had to stop the passing game and keep everything in front of us and let the defensive line eat.”

The only way for the Wolves to remain undefeated is by practicing and trusting that everyone is going to do their job. If everyone is training hard and running their position then the Wolves will exceed their expectations. The defense as a whole is superior and it is hard for this unit to be stopped. At this point, the defense has to remain physical and continue practicing to keep their record.

Brown brings value to the team especially being a part of the starting lineup. The overall goal is to make it to the championship along with safety, AJ Legget.

“AJ Legget has really come along and bought into the system,” said Brown. “So far he has two picks and he is leading our team right now.”

The Wolves are preparing for their fifth game against North Alabama. As Brown continues to maintain a healthy diet and train throughout the season, we can presume a great season for the Georgia native.