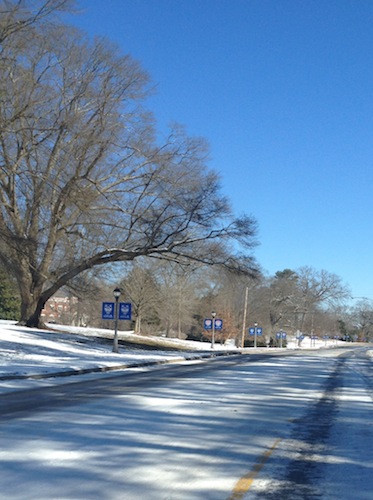 As everyone is now aware, Georgians do not really know what to do with frozen precipitation. Why should we? This stuff called snow is as foreign to us as the concept of “Hotlanta” is to the citizens of Wyoming. We have heard about it, read about it, dare we say dreamed about it, but when it comes down to it, we have little experience in handling it. Which is why last week Georgia went into a state of emergency, and the roads were more of a frozen nightmare than a white Christmas dream for commuters.

Most everyone has been very quick to cast blame where they believe it is deserved. Sure, schools could have shut down sooner, and companies could have closed earlier. Maybe the Georgia government should have spent more tax dollars on snow equipment for just such an occasion as this. Perhaps those weathermen could have done a more accurate job of predicting the weather.

Or maybe, we could all take a little more responsibility for not looking into the facts of our state’s history with ice storms.

In 2011, Georgia experienced a comparable ice and snowstorm that caused relatively little catastrophe or panic. Everything from the roads to the budding flowers on the dogwood trees were incased in ice. Schools and businesses were shut down for a week, but there were very few cases of people stranded, or of babies being born on the side of the highway.

However back in 1982, “Snowjam” as it is not quite so affectionately remembered, left traffic at a stand still on I-20 and I-285 for hours on end. Collision counts mounted as the ice prevented any hope of traction. People began to desert their cars, braving wind and ice in an effort to find food and shelter. Sound familiar?

What are the underlying factors that turn a mild winter storm that merely threatens your supply of bread, milk and hot cocoa, into a “Snowpocalypse” that threatens your life?

In 2011, the snow and ice came at night. The majority of people were safe at home, and businesses, governments and schools had time to evaluate the safety of the roads before their employees and students were due to arrive. In 1982 and again in 2014, the snow and ice came in the middle of the day. With temperatures in the mid 20s, it was cold enough for the snow to stick to the roads, causing accumulation almost immediately. Cars trying to beat the storm home melted the snow on the roads, but the sub freezing temperatures caused the melted snow to turn to ice. As more people tried to make it home, layer upon layer of ice was added to the frozen roads, ensuring that Georgians’ non-snow tires would be going no where fast.

So what lessons can be learned from these incidents? One main lesson comes to mind. Examine the facts for yourself. If the snow is not due until after dinner, maybe pick up more bread and milk on your way home that night. If the snow is set for lunch, consider the fact that if you were to go to work or school, you might not make it home until dinner the day after next. Whatever you do, take responsibility for your actions. The weather is no one’s fault. How each individual responds to the weather is where a Snowmageddon is made or broken.