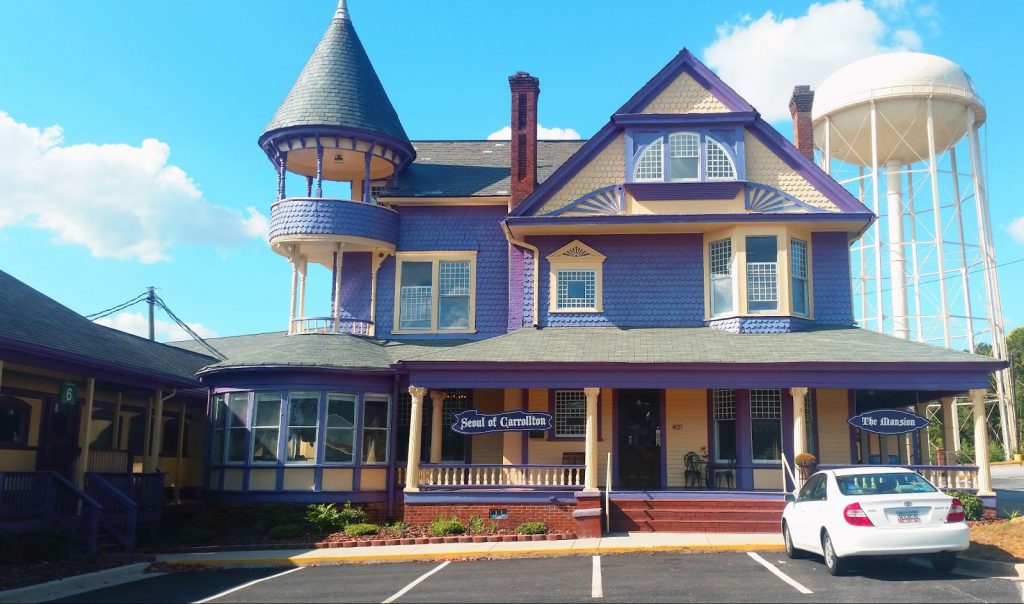 We have all seen it: the purple and yellow Victorian mansion that occupies its spot on Maple Street. Its deep history, whisperings of being haunted and overall beautiful image has made it a central figure in Carrollton history.

On Halloween, the 126-year-old mansion will feature its grand opening as the new restaurant Seoul of Carrollton.

Leased by restaurateurs Peter and Jamie Choe, the house has gone through some renovations for the newest change in its long history. The couple began leasing the house in July.

“We had to do a full kitchen build out and go through getting the fire code updated,” said general manager Dylan Abernathy. “We have had to piece some stuff together with the building being so old. We have been building out the restaurant since then, slowly and painstakingly so.”

Seoul of Carrollton began its soft opening on Oct. 6 with a food tasting event.

“It’s going really well,” said Abernathy. “For us to not even be fully open, we are really enjoying what is going on. Everybody is leaving happy. We can’t complain.”

As to why the couple chose the Maple Street Mansion for their ideal spot, Abernathy explained it was due to the history behind the house.

“We wanted this place to have a big spot in Carrollton,” said Abernathy. “I told Peter how much historical value it has and how many people want to come here because of what it is. It’s really rich in community history.”

However, this is not the Choe family’s first time at a restaurant. They are also the owners of Klucked Up Café and owned restaurants in Gwinnett and Atlanta before deciding to try their luck in Carrollton.

“Klucked Up was their test into Carrollton,” explained Abernathy. “They were tired of Atlanta and how busy it was and they wanted to get out into the country. They want to do full scale here and not only fast food. We will see where this place will take us.”

The 23,000 square foot mansion can sit up to 120 customers in three dining rooms as well as the train car, which doubles as a bar.

“It’s not nearly as old as the house, but it’s definitely a nineteenth century train car,” said Abernathy. “Our bar is going to focus on old fashion drinks that take time to make and look pretty. We are not doing the late night college scene. We want to offer alcohol in a relaxing environment where it is not a drink to drink thing.”

While the restaurant is waiting to obtain its liquor license, the Korean-American menu will be finalized for the grand opening. The menu features appetizers, Seoul rolls, rice plates, burgers, meat plates, salads, noodles, Korean tacos and lunch boxes as well as brunch for Sunday mornings.

“When we finalize our menu, we are going to lean more towards traditional Korean style flavorings instead of the fusion like it is,” explained Abernathy.

The most intriguing part about the restaurant is the visual blend of Korean and American. Western pictures line the walls and old music plays overhead while an Asian flair adds a touch of sophistication to the overall appearance.

“We have an Asian style restaurant in an old Victorian home,” said Abernathy. “It’s definitely an interesting vibe to the place.”

UWG students can find the mansion fit for lounging and studying. The tables in the train car has outlets as well as Wi-Fi throughout the building.

“We want to use it as a lounge where people can come study and enjoy themselves for a few hours,” said Abernethy.

The restaurant features a private room fit for 50 to 60 people. However, the owners have plans to turn the room into a potential area for trivia nights or poker tournaments.

“We want to do it,” said Abernathy. “Once we find some time to slow down after the beginning, we will probably have some more featured nights.”

Abernathy also expressed their interest in eventually renting the back bar located behind the mansion for a more complete look.

“We lease this front part,” said Abernathy. “We are looking at leasing the back bar in six to eight months. It’s a money thing.”

Ultimately, Seoul of Carrollton’s goal is to provide a good experience for each customer.

“We want to cater everything towards our service,” explained Abernathy. “We want the food to be good, but most of all, that people are taken care of. That’s what we care most about.

Seoul of Carrollton is located at 401 Maple St. They are open Tuesday through Saturday from 11 a.m. to 10 p.m. and Sunday for brunch from 11 a.m. to 3 p.m. West Georgia students can receive 10 percent discounts with their student I.D.