It is a tough task to be fully committed to two things at once being a student athlete who deal with these dual-commitments. Going to college as a full-time student and athlete may seem as though it can be easily managed; but the overload of school work and sports can become overwhelming. 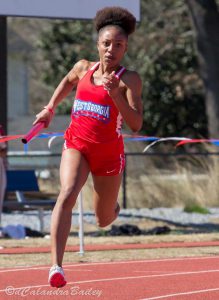 “It’s tough,” says UWG student Emani Collins. “I also assist with a professor in the English Department so sometimes my days are rough and busy, but I love it.”

Collins is a graduate student at UWG who is on the track team. She graduated in December of 2017,  from UWG with her Bachelor’s in English and is now completing her Master’s. She takes her writing seriously and has been challenging herself by doing extra-curricular activities that enables her to strengthen her skills. One of those extra activities deals with the creation of her blog site Emancipateyourself.com. She puts stories on her website every Sunday, then chooses her best story to post on LinkedIn.

“I was tired of just writing for class or school,” says Collins. “I wanted to do something more contemporary.”

With her writing skills, one of her papers became noticed and allowed her to travel to new territory. In September of 2017, Collins submitted one of her essays from a previous class into the Sigma Tau Delta International Conference. Her essay was later accepted by the judges and she attended the event in Cincinnati, Ohio during spring break. During the event, she got the opportunity to present her essay to the audience at the convention.

“The convention was really interesting because I had never been to Cincinnati before. I enjoyed the sight-seeing that I got to do. My mother went with me and we went to the National Underground Railroad Freedom Center.”

Her time in Ohio was not just pleasure but also a rewarding experience.

“I did get recognized by my department for being the only one who had an accepted essay,” Collins said. “UWG had multiple students who submitted their work into the program, but I was the only one that got accepted for this one.”

Collins recently has been awarded the Graduate Studies of Underrepresented Minority Students Fellowship. This is an award that was created by the College of Arts and Humanities in efforts to represent different minority students who are graduate students.

She plans to focus on African Women literature as she continues through her program. Collins has always loved African American and Women’s literature and has chosen to compile them into one topic.

Collins has achieved many accomplishments while still managing to be a committed athlete. She has stayed focus and has been persistent throughout her college career. She has shown that she is more than an athlete and that she can manage to balance the two lifestyles accordingly.

“I want to be an English professor in the future, and I will be starting as a teacher assistant for the department,” said Collins as she prepares for her career off campus.