The release comes after over a year of anticipation as fans have awaited the return of the wide array of over-dramatic characters in the streaming giant’s accurate adaptation of the beloved children’s book series by author Lemony Snicket that dons same name.

The 13 book series follows the lives of the Baudelaire siblings Violet, Klaus, and Sunny and their long and unfortunate journey to finding a safe home upon becoming orphans after their parents perish in a terrible fire. Their search for safety however is both long and dangerous as their their initial guardian, the mysterious and sinister Count Olaf, and his eerily morbid theater company of henchmen seek to kill them in order to inherit their massive fortune. 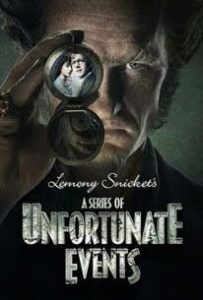 plot moves the children from house to house as peril follows both them and whoever their new guardian may be as Count Olaf and his team repeatedly appear in new undercover roles to get close to the orphans and their fortunes. Luckily the children are resourceful and use their knowledge, inventions and unique skills to somehow manage to escape Count Olaf’s plot in nearly every case.

Season one of the Netflix adaptation covered books one through four and followed the Baudelaire orphans from The Bad Beginning all the way to The Miserable Mill. The first season also left many viewers convinced and concerned as the situations of intense, yet comedic, peril that the children faced often seemed far too severe for its TV-PG rating and would surely be changed in the future.

Season two however is no exception as the show has maintained the same rating with a considerably darker and more gruesome plot while also incorporating elements that include some foul language, sexual innuendos, scare tactics, bullying and the use of both alcohol and tobacco products.

Season two follows the orphans on their journey to seek both safety and truth regarding the circumstances of their parents’ death as the case of the fire and rumors of survivors begin to circulate. Covering books five through nine fans are strapped along for a series of suspenseful interactions as the orphans make their journey from harsh living conditions at the Prufrock Preparatory School in The Austere Academy to struggling to survive The Carnivorous Carnival in a vast wasteland. With unforeseen twists around each corner viewers are left on the edge of their seats as the Baudelaire orphans continue to press on despite the constant pursuit of their former, evil guardian.

Season two somehow seems to have improved upon the series’ base and managed to not only build upon the hopes and expectations of fans but also exceed them. This surprising improvement seems to be the result of both the accuracy shown in the translation from page to screen, as well as, the overly dramaticized acting from the star-studded cast featuring Lucy Punch as Esme Squalor, Patrick Warburton as both narrator and Lemony Snicket, and award-winning actor Neil Patrick Harris as the sinister Count Olaf.

Altogether, season two of A Series of Unfortunate Events is a vast improvement upon the already heavily-praised first season and fans can only wait in anticipation for the third and final season’s expected release in early 2019.