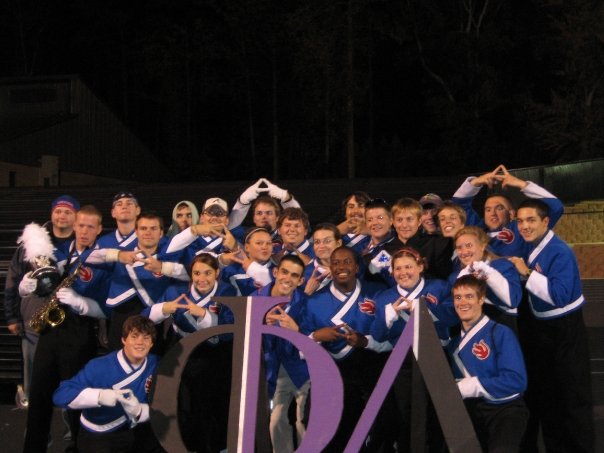 Greek life is portrayed in many different lights. There are the positive aspects: service, a sense of belonging or a home away from home, but to every positive there is a negative: excessive partying, hazing or paying for friends. While some people join for the positives, others join for the negatives.  However, some join to start traditions.  At UWG, one organization, Phi Delta, stands out in the crowd by starting on campus and being the only one of its kind.

Phi Delta isn’t the standard Greek organization, or even the standard music fraternity. Tau Beta Sigma, Kappa Kappa Psi and Phi Mu Alpha are three music fraternities on campus that are nationally recognized. Phi Delta has created its own piece of West Georgia history by starting on campus and being the only chapter of its kind. While the other three organizations solely served the school’s band side of music, Phi Delta wanted to cater to both chorus and band.

In 2006 the nine founding fathers set out to pursue their dream and created Phi Delta. Most of the traditional Greek organization on campus have been around for many years and already have established headquarters. Not having any higher up people or any past events to use for references made it a struggle to start the group. “There were a couple of times it almost completely fell apart and didn’t happen,” said Phi Delta President, Lisa Rushing. “It was really hard, but they did it.” Rushing, like most of the other members, has met a couple of the founders a few times, but besides that the chapter has to make a lot of the rules up as they go.

When trying to choose between a social, service or religious organization, Rushing said the motivation was simple: helping the UWG Department of Music. “We just wanted to service a specific thing, and that was the music department,” said Rushing. “We’ll do set ups and break downs for ensembles, we clean the practice rooms, if a director needs help buying stuff, we’ll help them out.” Phi Delta focuses around on-campus service geared strictly toward the band and chorus departments at UWG. They plan to go out into the community in the future to help more musicians.

A negative aspect of being an organization like Phi Delta is the lack of recognition. “I wish there was more promotion because a lot of people don’t know we exist,” said Rushing. “Just like everybody else, we get put on the list of organizations, but that’s about it. There’s been a huge divide and we’ve always been our own little entity.”

With 13 active members and over 40 members total including alumni, Phi Delta is growing and developing every day. “We’ve been around for six and half years, but we’re still working on ourselves–we’re still improving this, changing that,” said Rushing. “Phi Delta is kind of the misfit group; we have so many random personalities. We’re working on ourselves and we’re getting there. People are starting to take us more seriously.”

All the change doesn’t stop the members from having traditions like more established organizations, but even with typical Greek events, the chapter had to fight off doubters. “Nobody took us as a real fraternity, but we’re here to stay, we’re going to do this,” said Rushing.  “We’re a family and we’re strong with each other. We’re not going anywhere.”