Universities across the nation dedicated Saturday, March 28, to giving back to their local communities through volunteer and service opportunities. For the second year, UWG students, faculty and staff participated in this national service campaign known as The Big Event.

The event was originally scheduled to begin in Love Valley, but due to frigid weather conditions the opening ceremonies were moved into the Campus Center Ballroom. Speakers including UWG President Dr. Kyle Marrero and State Senator Mike Dugan took the stage and motivated students for the philanthropic work they would be taking part in during the day.

As a UWG alumnus, Dugan takes every opportunity to come back and serve his alma mater. When students contacted him about speaking at the event, the only questions he asked were when and where.

“I’m not sure I knew exactly what I was getting into this morning, but I certainly didn’t expect to see this many people,” said Dugan. “That’s a great thing.”

The Big Event was founded at Texas A&M almost 30 years ago and has grown into one of the largest days of service for colleges and universities nationwide. Dustin Killpack, UWG’s Coordinator for Student Volunteer Programs, suggested bringing The Big Event to UWG last year in an effort to increase UWG’s involvement in the Carrollton community.

“I loved the idea of one day being dedicated across the nation to schools giving back to their communities,” said Killpack. “The first year, it was new and a lot of people didn’t really know what The Big Event was. This year, people told their friends and spread the word a lot more than our first year.”

Killpack utilized a Student Advisory Board to help plan and counsel on what students would want to see at such an event. Different student organizations and professors recommended students they thought would be interested and dedicated to the event.

Within the Student Advisory Board, committees of two to three students were formed and focused on different areas of the event such as the opening ceremonies, fundraising, recruitment and so forth.

“Three of the committees were dedicated solely to fundraising,” said Killpack. “They wrote letters and contacted local businesses to see if they would be interested in donating, whether money or supplies, at all to the cause.

Local franchises and businesses including Kroger, Publix, Waffle House, Papa John’s, American Pie and Belk took the time to donate supplies or a monetary contribution, as well as the UWG Student Government Association, who donated over $2,000 to the event.

Senior Kela Johnson and junior Shayla Hubert were two of the students involved in the Student Advisory Board. The two were responsible for planning and organizing the opening ceremonies; they dealt with tasks like ensuring food and drinks were available to the volunteers and coordinating the guest speakers.

“We learned last year how important it is to think on your feet,” said Johnson. “With the weather changing so unexpectedly and being so chilly, we made the last-minute decision to not hold the event outside for the sake of the students, faculty and staff.”

Both Johnson and Hubert were involved in the planning of UWG’s first annual Big Event and learned last year how chaotic it can be trying to direct a large group of people to various projects. This year, with nearly three times as many volunteers as the first year, the Student Advisory Board decided to streamline the process of separating volunteers by handing out pre-assigned wristbands when volunteers checked in.

Many Greek organizations and student clubs registered as groups prior to the day of the event which allowed them to stay together to work on a single volunteer project. Students could also volunteer on an individual basis and be randomly assigned to a service project during the registration. 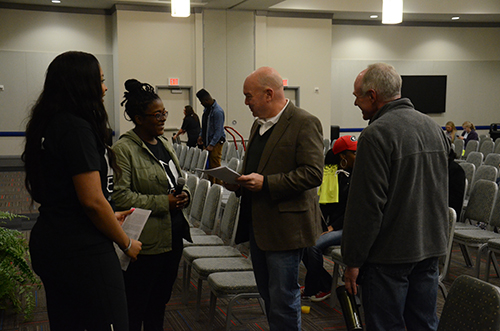 “We also have people doing activities on-campus that we will later deliver to different community organizations,” Hubert chimed in. “We have students making peanut butter-and-jelly sandwiches, sorting box tops and writing cards of encouragement.”

Over 200 students participated the event, totaling over 600 hours of community service for the Carrollton community. Killpack and the Student Advisory Board hopes the local community takes this as a show of gratitude for all they have done for the university.

“This is definitely our thank you back to the Carrollton community for supporting the university so much over the past few years and as we continue to grow,” said Johnson.