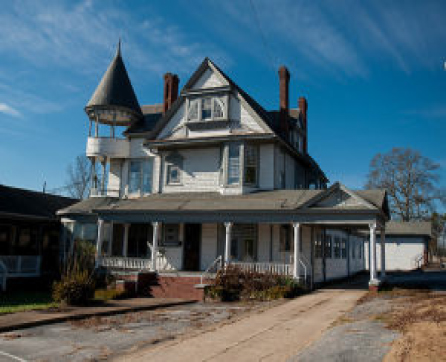 Carrollton attorney Richard Diment recently became involved in an effort to determine a solution that would preserve the local landmark.

“His first preference is not to demolish it, but to repair it,” said Diment.

Lin is a private owner of the property, which currently is not historically protected.

The Maple Street Mansion was constructed in 1890 by L.C. Mandeville.  Mandeville came from a well-known Carrollton family and was the founder of the Mandeville Cotton Mill.  For years, the property served as a restaurant and bar, which soon closed and left the Mansion to sit idle for several years until now.

Diment is planning to meet with Lin and Raymond Feng who is an agent for Bob Yang Realty in Atlanta.  They plan to assess the cost of reparations to the property and work together to determine a solution that will leave the structure intact.

“There’s the original house that was built in 1890 or so that is the front of it you see from the street,” said Diment.  “Behind it is a huge add-on that was put there about 20 years ago.  It’s enormous.  It was a very large restaurant and bar. That part makes the property multiple times its original size.”

There is no definite plans or solutions at this point, but Diment insists that the first concern of the owner is to restore and preserve the original mansion that was built by Mandeville.

“There’s a lot of different potential ways that this all could go,” said Diment.  “The owner is certainly not planning to do anything with it–to demolish it.  He’s agreeing to work through this process to see if we can come up with a way to salvage part of it.”

Lin would like to have lease the property to one or more tenants.  When asked about the possibility that donations from the community could help restore the Mansion, Diment was optimistic.

“Yes, very much so,” said Diment.  “At this point I would suspect that is the route that it needs to go if we want to save it.”

“I think what we would like to do to it is to see it obtain some sort of protection–historic protection,” said Diment.  “And we would like to see it restored in a good way.  He has the option from doing everything from demolishing the property in its entirety to restoring it in a wonderful fashion.”

The fate of the Maple Street Mansion may lie in the hands of the city residents that so eagerly seek its protection.  Donations from the community would be a huge step in the direction of preservation.

“That is probably where this thing is headed, toward some sort of fund drive,” said Diment.  “We have a long way to go before we know the details of any fund drive if that’s where it ends up.”