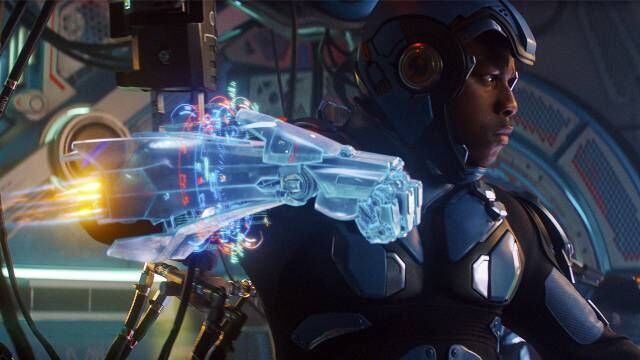 Seeing larger-than-life monsters on the big screen has been a staple of action movies since the original Godzilla movie. Giant robots are very much the same and it’s only natural that these two forces would eventually clash.

Pacific Rim, released in 2013 and directed by Guillermo del Toro, was not only a movie about robots fighting monsters, but a loving homage to classic giant monster movies. It was a fun, almost campy romp about giant robots known as jaegers beating up giant monsters known as kaiju and cancelling the apocalypse. The sequel is very much the same.

Pacific Rim Uprising is a direct sequel, taking place 10 years after the events of the first movie. The underground breach that the kaiju were emerging from has been sealed and the cities destroyed from the attacks and battles are re-building. The film follows Jake Pentecost, played by John Boyega, who meets a fellow scrapper named Amara, played by Cailee Spaeny. Trouble follows and the two of them find themselves in the military’s jaeger program.

Many familiar faces from the previous movie appear including fan favorites Newton Geiszler, played by Charlie Day and Hermann Gottlieb, played by Burn Gorman. Once the main cast is assembled along with new faces and jaegers, the action begins. The plot revolves around uncovering a mystery behind a rogue jaeger that attacks an assembly and new drone technology.

Though it definitely follows many of the same story beats as its predecessor, Pacific Rim Uprising improved on many criticisms of the original. Minor characters and jaegers got much more time to be fleshed out, giving them lengthy scenes rather than simple one-off lines before throwing them out to do nothing but die to raise the stakes for the protagonists.

The aftermath of the giant robot fights were shown, making the events feel realistic. The action scenes, like the previous movie, were fantastic. Fun to watch and easy to follow with many fun call backs to the first movie as well as other new additions. The new jaeger designs were unique and full of character, and the kaiju and other jaegers they were fighting did not disappoint.

Overall, Pacific Rim Uprising was simply a fun action story to watch. The characters were identifiable enough to keep the audience engaged and the action was both funny and suspenseful. Though perhaps not as deep as some would prefer, anyone who is a fan of giant robots or monsters will find it highly entertaining.