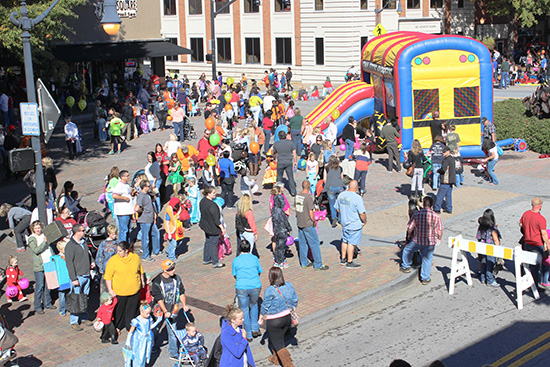 The spirit of Halloween was in full swing this past weekend in Adamson Square for the annual Fall Festival. Those that attended were able to partake in: music, festive costumes, inflatable slides and of course, candy. The festivities commenced at 10 a.m. and citizens of all ages dressed in costumes enjoyed trick-or-treating in a safe environment. The square was decorated in Halloween colors and filled with intriguing costumes at each corner. The most common costumes were Spiderman, Elsa and Olaf from Disney’s Frozen.

Halloween music played in the background as people lined up throughout the square and walked from business to business to receive their treats. Children, ages 12 and under, participated in activities such as: the second annual costume contest, inflatables, pumpkin carvings, storytelling and the mysterious witches brew drink.

“If I told you what was in the witches brew, you too would have the power to bring a smile to anyone that tastes it.  It has to be a Main Street secret,” said Phoebe Ericson, director of Carrollton Main Street events.

A local storyteller, Dorothy Pittman gave the audience a brief history about the carving of the well-known jack-o-lantern. As he carved into the pumpkin, he explained why the stereotypical jack used triangles instead of squares. History has says that triangles were not as valuable as squares; therefore, the leftover triangles of cloth would be used as decoration for scarecrows and that was where the idea for carving triangles to pumpkins came about. He invited the audience to taste the guts of the pumpkin and some children were brave enough to do it.

As the day progressed, parents and their children gathered at The Amp to show off their best costumes. The costume contest, sponsored by the Bridge Learning Center, had three categories of age groups. There were five winners in each category. Participants had to first register to be able to compete in their age group. The costumes were judged on creativity, originality, characterization and overall effect.

“A winning costume is a unique and original idea usually custom made or hand made.  I have seen some really great ones at this festival,” said Ericson.

The first age group was for ages zero to three. The winners in this category were dressed as Kristoff and Olaf, characters from Frozen. They made a grand entrance in a wagon that caught everyone’s attention, making them the favorite in their group.

The second age group was ages four to seven. The winner of this contest was a paired team of “greasers” – who are known for their fashion style of Chuck Taylors, flannel, slicked-back hair and blue jeans. The runner-ups included the Tin man from The Wizard of Oz, an astronaut, a tornado and Alice in Wonderland trapped in a rabbits’ house.

The third age group consisted of age groups of eight to 12. The winner in this age group was a nerd and a human gumball machine. The runner-ups were a garden gnome, a farmer, Olaf and a tribal queen.

Each of the winners and runner-ups received a lollipop and varied amounts of Downtown Dollars, which are Main Street’s independent gift certificate program. Carrollton Main Street was proud to offer the public an opportunity for their children to trick-or-treat in a trusted location. Carrollton Police closed off the streets at Adamson Square to ensure the safety of children crossing the streets for so they could safely enjoy all of the day’s activities.