Red Bull, the renowned energy drink company that gave you “wings” to kick it into overdrive at 2 a.m. when you decided to pull that all-nighter, is also known for giving you “wings” to the pursue your passions. From pictures of skydiving to supercross to kayaking and snowboarding, Red Bull celebrates the photographers who are passionate about capturing these photographs at the third edition of their Red Bull Illume Tour exhibition.

The Red Bull Illume Image Quest made a stop in in Piedmont Park in Atlanta, Ga. on Thurs., March 20 continuing on its worldwide tour showcasing photographs from action and adventure sports photographers from all over the world.

Red Bull started the night by directing the park’s attention to the sky. Two skydivers from the Red Bull Air Force team parachuted out of the sky into Piedmont Park. Surrounding the park were 25 giant black boxes that all started glowing simultaneously as the skydiver’s feet touched the ground. On the front and back of each box were enlarged photographs of the Red Bull Illume top 50 extreme action and adventure sport photographs.

The tour begins as an international photography competition. The top 50 winning photos were chosen out of 28, 257 photos submitted by 6,417 photographers from 124 countries. Red Bull divided the submitted photos into 10 categories such as: playground, energy, new creativity, close up and spirit—to name a few.

The sequence category winner, Zakary Noyle, shot his winning photo armed with his 70-200mm lens camera and without a tripod. Noyle says his winning picture reminded him of a life lesson. “When I was growing up my dad worked as a commercial photographer,” said Noyle. “He used to tell me that the best camera you have is the one that you have with you. To me, this meant that you have to be willing to do the best you can with what you have at all times.”

Red Bull is a lifestyle brand that thrives off everything extreme and adventurous. The Red Bull Illume Image Quest challenges photographers to capture the most exciting and creative shots possible.

“I want to use my photography to tell a story in one image—that’s why I chose a sequence shot.” said Noyle. “I try to recreate the action through a picture. I want to put whoever is looking at my photos on the scene. I want them to feel like they were there on the beach witnessing the same breathtaking shot I was. That’s how I approach every photo. I’m just passionate about photography. I’ve been doing this for 7 years, so I know what it means to be passionate about something.”

Noyle let what he loved to do become his passion. The Hawaii native said that he grew up on the beach and fell in love with the water at an early age. “I grew up in Hawaii, so I’ve always been comfortable in the water,” said Noyle. “The majority of the photos I take are in the ocean. I liked taking pictures. I just took something I loved and I let it guide me.”

Noyle says he has taken some very interesting and amazing photographs some of which are very challenging. “It was a challenge trying to capture this photo, but it’s about doing what you love no matter what challenges you face.”

Passion is not only limited to photography but should be applied to all aspects of life. “When I was in high school, I failed photography class, but I didn’t let that stop me.” “This is the best advice I could give someone who is looking to follow a passion they have: you’re going to face obstacles, challenges, and heartbreaks, but it’s up to you to persevere. When you find what you love, something you’re passionate about, let nothing stop you in pursuing it.” 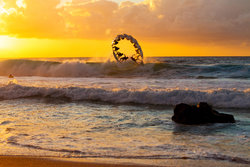