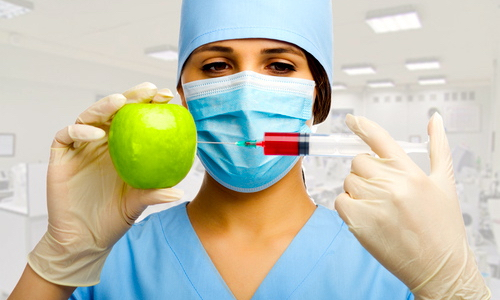 According to the World Health Organization, Genetically Modified Organisms (GMOs) are “organisms in which the genetic material (DNA) has been altered in such a way that does not occur naturally.”

Words like ‘natural’ are especially tricky when used in reference to crops. Does natural refer to the setting in which it is created? Or is it simply an indicator of what can possibly exist without human manufacturing? These are both reasonable questions to ask, especially in the midst of the growing technology in the field of farming.

In 2012, the European Food Safety Authority (EFSA) banned the use of Diphenylamine (DPA) on apples. DPA is used on apples that have been harvested already to preserve their skin. The reason for this banning is a link between DPA and a chemical named nitrosamine. Nitrosamine is a chemical that has been linked to illnesses such as bladder cancer, Alzheimer’s, Parkinson’s and Type 2 diabetes. EFSA would subsequently indicate a threshold on levels of DPA on imported apples of 0.1 parts per million, according to the Environmental Working Group.

Back in 2010, the United States Department of Agriculture examined DPA residues of US-grown apples. Nearly 80 percent of the apples contained this residue with an average reading of 0.42 parts per million. This is staggering considering that the allowable amount of DPA on an apple in the entire continent of Europe is three times less than that.

So what legal advancements are being made here in the United States regarding the use of GMOs? The answer—nothing at all. According to the Library of Congress, the U.S. does not have any federal legislation that is specific to genetically modified organisms. The laws in America actually encourage the development of these crops, foods and tools. Given the fact that GMOs are crucial to the biotechnology industry, and therefore the economy the country is at its mercy.

However, one American county is taking a stand against GMO crops. On Nov. 4, Maui County voted and approved a ballot initiative that would essentially postpone the use of GMO crops. The temporary ban on newly planted GMO crops is in effect under the conditions that they are examined for public health and safety.

This will allow for a more thorough investigation of the crops we consume, and could be, when all is done, the initiative that restricts GM crop usage for good.

Whether good, bad or indifferent, the effects of GM crops are what people seek most. The initiative started in Maui could be the catalyst for discovery in the world of GMOs.

The county is also preventing companies like Monsanto, Dow and Pioneer from conducting business as usual. These companies in concert with others occupy nearly 11 percent of the State’s agricultural land and produce GM crops.

We are at an important juncture for those seeking answers, because producers like Monsanto and Dow are challenging this initiative. This counter from GM crop providers could impede the progress this new legislation and research all together.

Experimentation on these crops must be done in order to be sure of the risks involved in consuming them. For now the initiative for obtaining more knowledge about these crops is under way, but for how long will be left up to our courts.

1 thought on “Searching for Answers About Genetically Modified Foods”