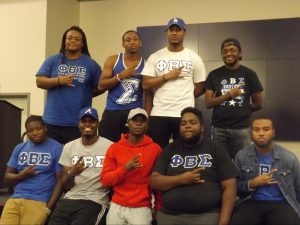 The members of the Nu Phi chapter of Phi Beta Sigma Fraternity Incorporated hosted their annual Sleepout for the Homeless event, which lasted 12 hours, on Wednesday, Sept. 28.

The goal was to put students in an environment similar to people experiencing homelessness. The Sleepout was not for enjoyment, but to raise awareness about what the homeless endure.

The event involved a group of students spending the night outside. The students did not have any blankets, sheets, pillows or shelter. Students who attended experienced what it was like to be uncomfortable, cold and hungry for a night.

People sleep outside every day and have no home to go to to escape harsh weather conditions.

Jovan Jinks, president of the Nu Phi chapter, felt this event was necessary, since no one hosts events for the homeless. He wanted UWG students to be aware of the severity of poverty in Carrollton. He said it does exist, though some may not be mindful of it.

Homeless is very close to the university, and students need to be aware of this.

“Homelessness is in Carrollton and some people don’t know that” said Jinks. “I just found out that there is a homeless shelter on Maple Street.

Jinks wants to convey to students that how we perceive the homeless is not always correct. Each person has their own unique story about their situation, whether they were born homeless or forced into homelessness.

“Most people simply overlook homeless people, but it probably could be something deeper than a screw up in their life,” said Jinks. “You never know what homeless people are going through. These are people who probably lost everything they had and are living off nothing and have nothing.”

Homeless awareness is important because there are people who become homeless every day, but it is not always recognized. People do not pay attention to homelessness as they do other tragedies. Any other crisis, whether it be a life-threatening disease, shooting or car accident, elicits a response from the entire community to make sure the people affected are taken care of. The same urgency is not exhibited towards the impoverished.

“Oh, somebody got shot so they want to do a cop forum, but there are people out there, homeless people, that most people don’t know about” said Jinks.

“Hopefully this can turn from an event with Phi Beta Sigma to an event for the campus.” said Jinks. “Anybody who wants to sleep out around campus can just come and pay tribute to homeless people.”

Phi Beta Sigma plans to continue bringing awareness to the students of UWG about homelessness in Carrollton and all over the world.