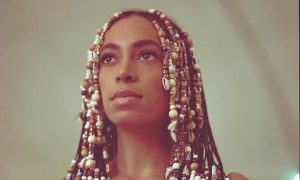 Solange released her third album A Seat at the Table on Friday, Sept. 30.  A Seat at the Table speaks to the emotional toll many African Americans face in today’s pivotal movement. The songs on the album act as mental therapy for those concerned with social injustices happening to African Americans right now. The 21 tracks include interludes and songs with well-crafted verses.

A Seat at the Table is the most recent in projects focusing on healing within the black community. Similar to the works of other artists, such as her older sister Beyoncé (Lemonade) and Chance the Rapper (Coloring Book), Solange offers an album rooted in embracing the trials and tribulations that come with black personhood. Solange features her parents Tina Lawson and Matthew Knowles, as well as rapper Master P, to share with listeners their personal experiences of blackness in the interludes. The interludes deliver insight through storytelling, all while providing listeners with a preview of what the next song will acknowledge. In each song, Solange offers her relaxing vocals to narrate an unapologetic description of black life.

Solange took to Twitter to say A Seat at the Table is intended to “provoke healing” and encourage a “journey to self-empowerment.” She acknowledges the different stages of pain in songs like “Weary,” “Cranes in the Sky” and “Mad.”

“Weary” describes the continuous state of mourning blacks find themselves in after witnessing so many police involved shootings. In the song, she sings “Be leery ‘bout your place in the world/ You’re leaving, not a trace in the world” These lyrics convey the idea of questioning why the world is in this state of violence and suffering. Solange challenges her African – American  listeners to question what makes them susceptible to racism and brutality. The lyrics“I’m gonna look for my glory, yeah/ I’ll be back like real soon” acknowledge the necessity of searching for spiritual liberation. She repeats these lyrics three times as to stress the importance of this quest in times of adversity. Looking for her glory implies that she has not yet found it in a society built off of racism and discrimination. Solange’s soft voice in “Weary” is direct in her approach to bring awareness to self.

For “Cranes in the Sky,” the singer describes trying to cope with the monstrous acts against African Americans. Verses like “I tried to keep myself busy/ I ran around in circles/ Think I made myself dizzy/ I slept it away, I sexed it away” summarize not being able to shake off the depressive episodes that come from witnessing African-Americans being gunned down by those meant to protect, as well as having no repercussions for the action. These verses describe Solange’s attempt at avoiding the feelings of sadness. No matter the steps taken to feel better, or forget for just a moment the depression can sometimes feel inescapable.

In “Mad,” Solange and Lil Wayne sing about the rage of many African Americans in a state of awareness. The lyrics say “I ran into this girl, I said I’m tired of explaining/ Man, this shit is draining/ But I’m not really allowed to be mad.” A familiar frustration within the black community is constantly having to explain why black lives matter. Continuously describing the pain felt to non-black people takes a toll, especially when they feel the shootings are proper protocol. “Mad” touches base on the premise of African American women being unable to channel their frustrations with society because of instilled stereotypes. Stereotypes such as the “Angry Black Woman” prevent many African-American women from saying what they are upset about. Many people assume the anger stems from her culture and it is not justifiable. The song resembles author James Baldwin’s comments regarding being black in America. “To be a Negro in this country, and to be relatively conscious is to be in constant rage.”- James Baldwin.  Lil Wayne reassures that being “mad” is okay and the reason behind the anger is valid.

Since the release of the album, Solange has debuted videos for both “Cranes in the Sky” and “Don’t Touch My Hair.” Both videos feature aesthetically appealing visuals of nine cities in  New Orleans, Texas, and New Mexico along with contemporary choreography. Solange featured clothing from young emerging designers such as the iconic pink puffer and the blue choir robes.

A Seat at the Table serves as Solange’s version of events. The album allows listeners to self-reflect on the beauty of blackness and the strength required to be black in America.  Solange’s album is currently number one on Billboard’s Hot 100 and could go up against Beyoncé’s Lemonade in the Grammy’s nomination for Album of the Year.