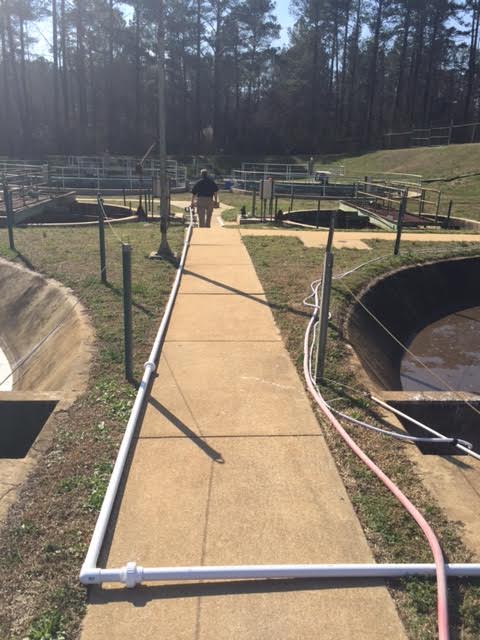 A UWG Alum is pioneering environmental protection with his patented product and company, NCLEAR. The phosphorus absorbing solution was co-created by Denny Ivey, a Chemistry major from UWG. Ivey and Founder of NCLEAR Steve Odom have been working on the project since 2011 and have developed NCLEAR to combat the global eutrophication epidemic.

Simply, eutrophication is the buildup of algae in large bodies of water due to excess amounts of phosphorus. Runoff waters that contain fertilizers and sewage all contain high levels of phosphorus that add to the abundance of algae. The takeover of algae essentially chokes out the body of water of oxygen and the thick film blocks the sunlight from penetrating it. Void of oxygen and water, organisms die as the bodies of water can no longer support aquatic life. The problem will continue to snowball until entire ecosystems break down and compromise the structure of the food chain. Ivey, the environmental chemist and Odom, the Chief Strategy Officer, worked the past six years to obtain a safe synthetic product that can handle many different environmental threats.

These mines were originally used to supply production of fertilizers and steel. After being abandoned for decades, natural weather events such as rainstorms and tropical hurricanes have caused water to flow into the mine and absorb the phosphates left inside. Trapped inside the mine, there is little danger to the ecosystem, unless the water gets out of the mine. “We call that a breach,” said Ivey. “Any type of natural water event can make the mine overflow and that water could spill out and potentially cause a big problem.”

Each of the mines in Florida is its own unique challenge, and NCLEAR is planning to build custom wastewater treatment plants that will suit the specific needs of each project. The water will be syphoned and extracted and be brought to the plant, treated with a series of NCLEAR products, and then be diverted so it can eventually be recycled, either through irrigation or to replenish another body of water. “We have a pilot prototype plant that cleans about seven gallons a minute, but we expect our first project to be able to treat 300,000 gallons each day,” said Ivey. “It is such a big project that we will even have our own NCLEAR production facility on-site.”

Water from the first mine they empty is expected to flow into Tampa Bay, but the goal is to eventually recycle the water. “With all the mines and lakes we need to treat, this is a 20-30 year project, so there’s much more to do,” said Ivey.

Florida, naturally behind so low in altitude, has a multitude of man-made lakes and holding ponds that have also become contaminated over the years. Florida has many underground streams that can flow up to the land surface that carry contaminated water that spreads to other bodies of water. These lakes face the same threat as the abandoned mines do, and rather than have to dig more holding ponds to accommodate the growing amount of contaminated water, the Florida Environmental Protection Agency enlisted the help of NCLEAR for it’s problem. “The Florida EPA wanted us because our product works well, but it poses no threat to the environment,” said Ivey. “The entire project is beneficial.”

The 20-30 year time frame for completion of the project may seem like a long arduous process, but it is a small price to pay when comparing what could happen if eutrophication goes unchecked.