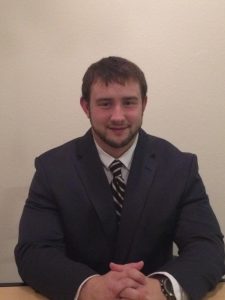 Don Jones sits up in the stands at University Stadium as he records the UWG football team locked in a close annual rivalry game with Valdosta State University. It’s third down, and the Wolves are down by one with five minutes left in the game. Dallas Dickey rolls out of the pocket and runs nine yards into the end zone for what would be the deciding score in the game. Donald Jones, a big fan of the Wolves, got it all on film, to which UWG used to help motivate the team for the rest of the year.

Jones has not always been a crazed fan at UWG. He comes from humble beginnings. He was born in 1989 in Tampa, Fl. Even though he was the older of two boys, Jones was the smallest and got all of his mother’s attention. However, he was given no slack when competing with his younger brother in anything. Jones and his family have always been competitive, especially in sports.

In 1995, Jones’ family relocated to Warner Robins, Ga. for his father’s job. He was entering first grade and had hopes of playing football. At the beginning of his freshman season, Jones was the fourth string quarterback. By his senior year, Jones had become a highly sought after quarterback who was selected to multiple All-Star selections coming out of high school.

Jones life changed when he accepted a full ride scholarship to play football at the University of Florida. He was ready to be added to the list of greats to play for the Gators. His college career and life would take a turn when in October of 2008 Jones suffered a season-ending torn ACL. He remembered saying to Coach Urban Myer, “give my scholarship to someone who can keep helping this team.” Myer met with Jones and his family later in the week where they all agreed that Jones would forfeit his scholarship in efforts to help the team. The Gators went on to win the NCAA championship that year, to which they mailed Jones his ring months later.

“I was so happy for them, but at the same time, I was devastated when I got that ring,” said Jones. “I didn’t even consider it to be mine.”

After his freshman year, Jones was not offered a spot back on the team and decided to leave Gainesville. In the years following, he played semi-pro football in the Southern Football League (SFL). He, along with two of his teammates, were selected to the 2010 SFL All-Star game where he met an agent, Ken Fosters. Fosters was a players agent for the Canadian Football League (CFL), and the CFL was interested in signing him. Jones pondered the decision to move to Canada and further his football career at a bigger stage but turned it down. Two years later the SFL collapsed, and Jones was out of a job and football.

He took time exploring his options when he had a brief job at Bank of America but felt that was not what he wanted to do for the rest of his life. He decided to go back to school and enrolled at UWG. Still being infatuated with sports, especially football, Jones attended as many Wolves games as possible. In doing so he met Nick Grosso, a video coordinator for the football team. Grosso helped him get a position recording game footage for the Wolves.

Jones began recording all of the football games he could go to. After each game, he sent the footage to Head Football Coach Will Hall.

For the 2016 football season Jones will be working for the football team doing exactly what he has developed a passion for: helping the team win in any way possible. He can be seen at the east end of the stadium on a lift recording each game with professional equipment provided by the Wolves.

“I am excited about this opportunity and hope that this will one day lead to a chance for me to continue my passion with sports,” explained Jones.