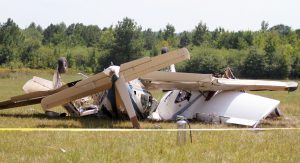 Carrollton, Ga. – According to the Times Georgian, three people were killed in a plane crash at West Georgia Regional Airport on Wednesday, Sept. 7.

There was no damage done to the runway and there was no fire when the planes crashed, but the damage was so extensive that it was hard to tell there were two planes involved, according to Blue.

“According to our witnesses, both planes were in a landing pattern and appeared to be trying to land at the same time.” said Blue.

At this time, officials are not exactly sure what happened prior to the crash, and they are not clear as to whether or not any communication occurred between both pilots prior to the collision.

“There’s so many things that we could speculate,” said Blue. “Was there any mechanical failure on any of the aircrafts? That type of thing.”

Unlike Hartsfield-Jackson Atlanta International Airport, the West Georgia Regional Airport is a small airport with only two runways and has no traffic control tower and no air traffic controllers. Pilots typically communicate on a shared radio frequency.

“Since it isn’t air controlled, it’s more of a line of sight situation, and you use the radio to inform surrounding pilots of your movements,” said Blue.

Because the airport is small, having little to no air control is not unusual. Pilots have to rely on a ‘see and avoid’ practice, which means they have to be aware of who is flying around them and frequently announce their location on the shared radio frequency. Usually, someone called a Fixed Base Operator, whose duties consist of performing maintenance, monitoring the radio and parking the planes, is on the field. It is unclear if one was present at the time of the crash.

The case is out of Carroll County’s jurisdiction and has been turned over to the National Transportation Safety Board (NTSB) and the Federal Aviation Administration (FAA), who will be determining the official cause of the crash. The FAA has completed their part of the investigation and are waiting on the NTSB.

The NTSB is the lead agency in this investigation. It usually takes several months to complete because they go through every piece of wreckage, measure everything and record it.

The West Georgia Regional Airport resumed operation and air traffic continued after the crash site was cleared by the NTSB on Sept. 8.