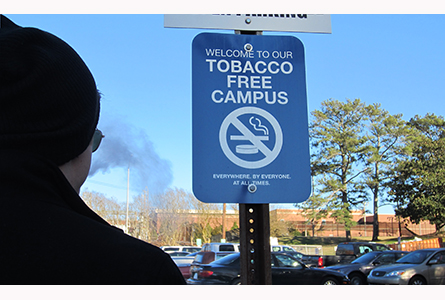 In fall 2014, the University of West Georgia became a tobacco free campus. One of the important issues discussed when the policy passed was that the campus police would not get involved by administrating citations to tobacco users. UWG Police are supposed to enforce the law, and the ban on tobacco is only a policy. State law does not ban tobacco, so there cannot be any penalties for a person who is caught smoking on campus.

The Georgia Board of Regents decided to become tobacco free because it would receive tax breaks from the state of Georgia.

Before the tobacco free policy was set in place, the UWG police received many complaints about secondhand smoke. Complaints focused on the areas outside of Pafford and Bonner Lecture Hall.

“The intense amount of smoke had students and staff worried,” said Mackel. “The university became tobacco free mainly because of the board. However, the other main reason was because it was a health issue. Secondhand smoke was as big of an issue as singularly smoking a cigarette.

“When someone is caught smoking on campus, it will have to be something that goes through Human Resources because it is a policy issue,” continued Mackel. “However, it would be best to confront the person and suggest that they go to student counseling to help with their smoking habit. Smoking or even chew or spit tobacco is very difficult to quit.”

Student smokers have a different opinion.

“I have smoked many times on campus and not one person has ever told me not to,” said an anonymous student smoker. “Even if someone did tell me not to, it is easier said than done. I can not really take time out of my schedule to go to the Health Center to have them help me quit smoking. I am not even sure if they even have programs or medicine to help me stop.”

The policy does not allow any vaping on campus nor does it permit designated smoking areas.

“We have noticed the popular smoking area behind the Humanities building,” continued Mackel. “Clearly it is an issue that must be addressed. There are many people smoking behind Humanities, but the problem is that the police cannot get involved by handing out any citations. When a student does find someone smoking on campus, the thing to do is to remind them that we are a tobacco free campus. It is up to everyone on campus to keep West Georgia a smoke free campus.”

Student smokers, however, perceive the area behind Humanities as a haven to get away from the stresses of student life.

“West Georgia does not understand where a student smoker is coming from,” said the anonymous student smoker. “School is very stressful, so I am not even sure if I want to quit. I smoke behind the Humanities building because it is hidden and not by any walking paths. I can’t walk all the way off campus to smoke. I do not have the time between classes to walk off campus and then smoke.

“With the money the school is saving by being a tobacco free campus, they really should help student smokers quit or create some kind of compromise,” continued the student smoker. ““Until the school shows that they actually want to be a tobacco free campus, beside putting up a few signs and advertisements, I will continue to smoke with my friends,”

1 thought on “Tobacco free campus not so tobacco free”