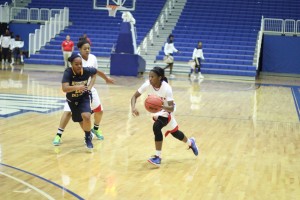 For many, the desire and passion to become great in a particular sport began at an early age when they were enrolled in recreational sports or admired a particular professional player. This can be applied to one University of West Georgia (UWG) student, whose love for basketball started when she was young and has continued to grow ever since.

Bre’ana Singleton is the point guard for the UWG women’s basketball team. Her passion for the sport began at the age of three after she watched Space Jam, which featured NBA great Michael Jordan. Throughout her childhood, she participated in various activities, such as softball and cheerleading, but none attracted her more than basketball.

Singleton played basketball for Collins Hill High in Suwanee, GA. During her senior year, she signed to play for the University of Montevallo in Alabama. After her freshman season did not go as well as expected, her path to playing for UWG began. She discovered the school had open tryouts. Once she met some of the players and coaches and took a tour of the campus, she instantly realized UWG was the right place for her.

In the two seasons she has played for UWG, Singleton has grown both mentally and as a player and is now considered one of the leaders of the team. As a junior, she is currently averaging seven points a game with four assists and two steals. She says the more she plays, the more she has become comfortable in her role on the court.

“I know what [Coach Groninger] expects and what my teammates expect of me and what I hope to get out of it,” says Singleton. “It’s just me becoming more comfortable on the court and more comfortable in my role.”

With the women’s basketball team facing difficulties this season, Singleton’s leadership on the team has increased drastically. The Lady Wolves have a losing record of 3-10 and their leading scorer, Aysha Harris, recently sustained a season-ending torn ACL. Singleton realizes the mental and emotional impact a losing season can have on many of her teammates, especially those who come from consistently winning or state championship high school programs. Through the adversity, Singleton constantly reminds her teammates they must remain focused and continue working hard each game.

“As a leader you have to make sure that the younger players know that this is not the standard and that this is just a rough period for us,” says Singleton. “As long as we keep working towards our goals, we’ll eventually get there. We just have to stick through it.”

She strives every day to better herself individually both on and off the court. She is always up for learning different skill techniques, and no matter how well she played during the season, Singleton says she is always finding something to improve once the season is over.

“Over the years, I just learned to get better each season individually and take something away each season. You have to recognize what you were good at and what you need to work on, then you take those things home with you over the summer and come back in the fall ready to play.”

While she has enjoyed playing basketball, plans to enter the WNBA are not a part of her future. Singleton says that with her mass communication background she is interested in being in sports radio or becoming a commentator for the WNBA.

Through basketball, Singleton has acquired skills she considers beneficial for her life on a greater level than just the court. Two important skills she gained from playing basketball are the ability to network and realizing that life is full of ups and downs.

“This year I think I learned most especially how to handle adversity,” said Singleton. “When things don’t go as planned, it’s about how you answer and how you come back from these things. Adversity as a whole has taught me a lot.”