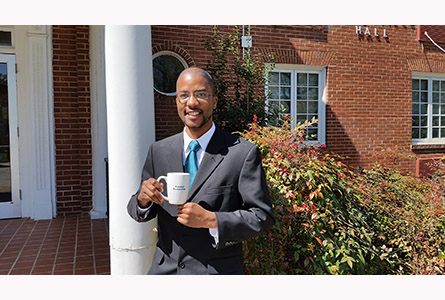 Ever since Dr. Christopher Jett, assistant professor of Mathematics Education at the University of West Georgia, was a young boy, math has been his favorite subject. After being known as the math whiz kid in elementary school and tutoring friends in math, he was, ironically, given the nickname “Professor.”

Jett was awarded the esteemed National Science Foundation (NSF) Career Grant for his research in the broadening participation of African-American males in science, technology, engineering and math (STEM) majors. According to Jett’s research, black males are underrepresented in STEM majors in Georgia institutions. Over the next four years, he plans to use the $400,000 from the grant to interview African-American males at different Atlanta institutions about choices and experiences of being STEM majors. This is a subject of particular interest to Jett, as he is a black male STEM major himself.

“In the third year [of my research], I will have what I call the ‘African-American Male Mathematics Network,’” said Jett. “I’ll have things like webinars, and I am going to create a website and a Facebook page to support black men who have interests in mathematics.”

Mathematics has been a large part of Jett’s life since his childhood. Jett credited his dad as his main influence in his decision to study math.

“My dad was very instrumental because he studied accounting in college,” said Jett. “I think just being around numbers all the time and that exposure as a young kid really help propel that interest in math.”

While Jett has only been a member of the UWG faculty since 2012, he is quickly making his presence known with the number of awards and grants he has earned in his years here. Jett was previously awarded the President’s Development Award, the Outstanding Teaching Award and, in addition to the NSF Career Grant, Jett will be awarded the University Scholarship of Teaching and Learning (SoTL) Award on April 20.

Even as his award count grows, Jett said he is most satisfied by his job when he sees his students succeed.

“The most rewarding thing about my job is that I get to work with future math teachers,” said Jett. “If I really get to influence them, the influence is beyond me. It’s humbling to know that I get to affect all these people who will go out and affect other children in schools.”