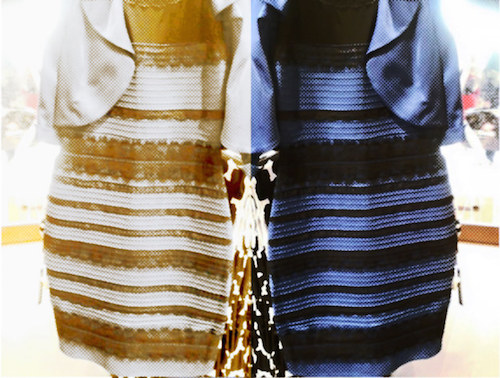 We have seen “the dress” on Instagram, Twitter, Facebook and even on professional news syndicates. The infamous dress is the white and gold, or blue and black depending on who you ask, that appeared on various social media platforms and seems to have broken the Internet more than Kim Kardashian did with her Paper magazine cover. The dress generated so much publicity due to the fact that people tend to see the same picture of the same dress, but with different colors. One person legitimately sees the dress to be white and gold while another individual can look at the same picture and see the dress as blue and black.

Many various explanations as to why different people see the dress as different colors have been suggested. Some say that if a person sees blue or black, an influential source is negatively affecting them. Others counter that argument and say that the dress is blue and black, but poor lighting makes it appear to be white and gold.

“It’s not a chemistry issue. It has to do with lighting and how you perceive the colors in the background compared to the dress,” said UWG chemistry professor, Dr. Douglas Stuart. “The way we perceive the colors and images in the photograph influences what color we see. So it’s more of a psychological thing.”

These factors range from over-determined dream symbols to perceptual biological factors to the effects of the individuals background and upbringing that cause us to see different colors. Dr. Dodson sees the dress as white and gold.

“The only psychological factor about the phenomenon is that it proves that individuals don’t perceive the world the same way, contrary to popular belief.” said Dodson. “That’s too simplistic of an answer,” he said. “It’s society’s way of justifying that explanation.”

This debate leaves us wondering why we see the dress differently, and more importantly, who is right.