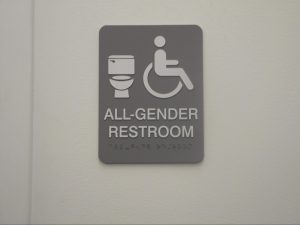 On Sunday, Sept.18, UWG student Lans Carcioppolo removed all-gender bathroom signs in the Ingram Library on the ground floor. Though these signs were temporary, they were placed on single-occupant bathroom doors until the permanent ones became available.

In addition, someone took a cellphone video of the incident. Screenshots were captured and those pictures were then posted to Carcioppolo’s Facebook page with a caption.

“I just ripped this bull crap off,” Carcioppolo said. “Doing my best to stop the further liberalization of UWG.”

The photos have since been deleted.

“As we investigate this matter, please know we are treating it with the utmost seriousness,” Marrero said. “The behavior exhibited Sunday does not represent the environment we seek to create at the University of West Georgia. We strive to help all students maximize their potentials and actively pursue learning experiences that promote an openness to diversity and appreciation of differences.”

According to Gary Leftwich, Director of Strategic Communications, Carcioppolo has met with the Dean of Students; he did not get suspended from UWG.

Though he was not a part of the committee who decided to make the restrooms all-gender, Leftwich does not think anyone expected that type of reaction.

“The committee worked on a recommendation to just change the signs to reflect that they are available for all-gender use,” Leftwich said.

In light of the incident, he also commented on the safety of UWG students, especially those in the LGBTQ (Lesbian, Gay, Bi-Sexual, Transgender, Queer) community, who may want to use the restrooms.

“The policy is like a lot of our policies that are meant to guarantee a safe environment for all students, so this is the university’s way of reaching out to those communities and providing a restroom that fits their needs, as well as the needs of other students who may wish to use them,” he said.

“I know for a fact that Lans’ actions have made some trans and gender non-conforming students uncomfortable, uneasy and even frightened to use the all-gender bathrooms on campus, in addition to the public restrooms that align with their gender,” Hearn said.

She also spoke about Carcioppolo’s actions. Though she believes he does have the right to freedom of speech, his speech and actions should not threaten anyone else’s or their safety.

“This student’s actions here did just that,” Hearn said. “Lans did not merely take to social media to express his discomfort or disagreement with trans-inclusive bathroom signage, nor did he simply take the time to report signs he believed to be against university policy.

“He videoed himself proudly and aggressively tearing the signs—placed there by Ingram Library staff—from the door,” she continued. “The comments section of his post became even more troubling, with violent insinuations towards trans people made by himself and other commenters. Unfortunately once the post gained negative attention, he removed it before anyone could get screenshots of the comments, so that of course, is hearsay.”

Hearn even criticized UWG and President Marrero for not defending transgender students as well as others who have concerns about issues on campus.

“A statement of this kind does not show support for trans students, but rather displays a desire to quiet those who speak out against discrimination and sweep persisting issues facing our marginalized student populations under the rug.”

The West Georgian tried to reach out to Carcioppolo for comments about what transpired, but he did not respond. However, on Monday, Sept. 23, he posted a Facebook video, explaining his feelings on the matter.

“Was I a little aggressive in pulling down the signs?” he said.  “Yeah. Maybe just a little bit. I will not apologize for standing up for what I believe in. I’m tired of liberal campuses shutting down a conservative agenda.”

He believes all ideas should be welcome on college campuses, but, in reality, that is not the case.

“The safe space is a sham,” Carcioppolo said. “It’s all a facade. What’s gonna happen in five to ten years when we have college campuses that can’t expresses ideologies, different ideologies—conservative, liberal, socialist, fascist. That is not how you learn.”

Furthermore, he thinks being conservative or liberal is fine.

“We have two different opinions,” he said. “We’re Americans. That is our right.”

Lastly, he added that he is not going to let anyone quiet his views.

“I’m going to continue to stand up for my beliefs, and I’m not going to let a school or single person shut me down and shut my First Amendment rights down.”