Skip to content
The UWG Wind Ensemble performed their last concert of the semester at the Carroll County Performing Arts Center on Nov. 11. Dr. Josh Byrd, Director of Bands and Associate Professor at UWG, was the conductor for this performance.
“It’s going to showcase all the woodwinds, the brass, the percussion in ways that people may not be used to hearing them,” said Byrd before the performance.
The concert began with Byrd thanking all veterans in remembrance of Veteran’s Day, and the ensemble performing the Star Spangled Banner. Byrd conducted this piece and encouraged audience members to stand and sing along. 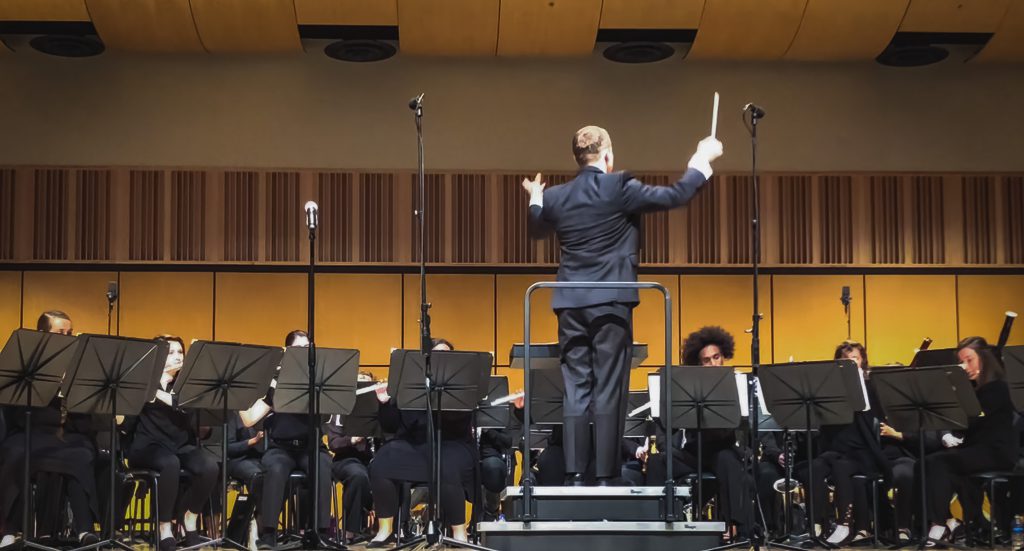 The next two pieces were Concerto for Saxophone and Concerto for Tuba. Each piece was chosen to showcase two student soloists. For Concerto for Saxophone, Alex Payne played his rhythmic solo and for Concerto for Tuba, Luke Bass performed a fun and moving solo.
The guest conductor for this concert was Dr. Jacob Wallace. Wallace is a personal friend of Byrd and proudly led the UWG Wind Ensemble in performing Shenandoah as the fourth piece of the evening. The piece showcased each section, warming up the band for the finale.
Byrd prefaced the headlining piece by sharing the emotional story of how it was written, and why it is special to himself and the ensemble.
“It’s a symphony by David Maslanka,” said Byrd. “It’s his tenth symphony, and he passed while writing it. It’s super sad, but intense. His son finished it for him. The first movement is about his wife who had passed. It’s really got a lot of raw emotion in it.”
Maslanka’s Symphony no. 10 consists of four movements based off his life and a series of sketches, one of which happened to be featured on the front of the concert’s program. Only one and a half of these movements were completed by Maslanka himself and the rest of the symphony was completed by his son, Matthew Maslanka, at his father’s request.
“This is also the longest piece we’ve ever played,” said Byrd.
Maslanka’s symphony lasted more than 40 minutes, with only short breaks in between each movement to give the musicians time to turn the page to the next. However, the emotion and length of the symphony was not the only thing that made this piece special.
“We’re going to be the second band in the country to play this symphony all the way through,” said Byrd. “It’s a co-premiere with Kennesaw State.”
The students in the Wind Ensemble were also having a bittersweet moment on stage as they played this final piece — after the last movement, many of their fellow band members will say goodbye to the ensemble.
“It’s sad because it’s the last concert of the semester, and we’ve got some student teachers moving on,” said Byrd. “It’s a bittersweet time, but it’s a great way to celebrate.”
Byrd and the UWG Wind Ensemble performed a captivating and emotional set, bringing their fall performing season, and some of their student careers, to a close.